Israel's New Government in the Eyes of Palestinian PM: As Bad as the Netanyahu Era 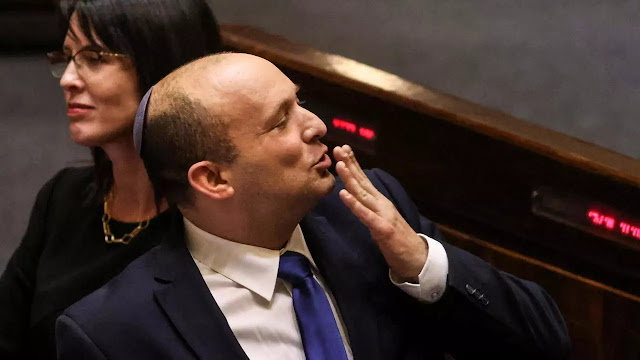 UMMATIMES - The Palestinian prime minister called the new Israeli government as bad as the previous government.
Earlier, Palestinian PM Mohammad Shtayyeh said that the ouster of Benjamin Netanyahu closed one of the "worst periods" of the Israeli-Palestinian conflict.
"The departure of the Israeli prime minister after 12 years in power marks the end of one of the worst periods in the history of the Israeli-Palestinian conflict," Shtayyeh said ahead of Monday's weekly Palestinian Authority cabinet meeting.
However, he said, Israel's current prime minister, Naftali Bennett, is as bad as he was before.
"We do not see this new government as better than the previous one, and we condemn the announcement of new prime minister Naftali Bennett to support Israeli settlements," said Mohammad Shtayyeh.
He was referring to the movement of hundreds of Jewish settlers who invaded land in the Palestinian West Bank.
"The new government has no future if it doesn't consider the future of the Palestinian people and their legitimate rights," Shtayyeh added.
It is known on Sunday (13/6/2021), the Israeli parliament by a narrow vote chose Naftali Bennett as the new prime minister.
Bennett is in coalition with right-wing, center-left and left-wing parties, as well as Islamic conservative parties in Israel.
Bennett, a former leader of Jewish settlers in Palestine, said Israel was "at the start of a new day" after being elected on Sunday.
According to the Guardian report, PM Bennett has ruled out a Palestinian state and wants Israel to have full control over the occupied lands.
Bennett previously called for Israel to be stronger in its attacks on the Gaza Strip, Palestine. It is known, Bennett was once the chief of staff of former PM Netanyahu and joined the Likud Party.
On Monday (14/6/2021), Bennett and Netanyahu held a 30-minute meeting to formally hand over power.
However, the two did not undergo a photo session together, a moment the Israeli public had been waiting for.
Naftali Bennett, 49, officially ousted Benjamin Netanyahu after opposition leader and coalition partner Yair Lapid won a vote of confidence in the Knesset.
The votes for both camps were very thin, ie 60-59 seats. Under the power-sharing agreement, Bennett will hand over the post of prime minister to Lapid after two years.
After Netanyahu stepped down, thousands of Israelis gathered in the square in the Knesset area of ​​Jerusalem waving the national flag.
Anti-Netanyahu mobs carried posters reading "Bye-bye Bibi", Netanyahu's nickname.
The first test of Israel's new government comes this Tuesday. Where there will be a parade by the right-wing Jewish nationalist masses.
They will march through Palestinian neighborhoods in Jerusalem.
Israeli police have changed routes to avoid the Muslim quarter of the Old City. Palestinian factions in the West Bank have called for condemnation of the march, Al Jazeera reported.
Last month, Israel carried out violence against protesters at the Al-Aqsa Mosque compound which left hundreds of Palestinians injured.