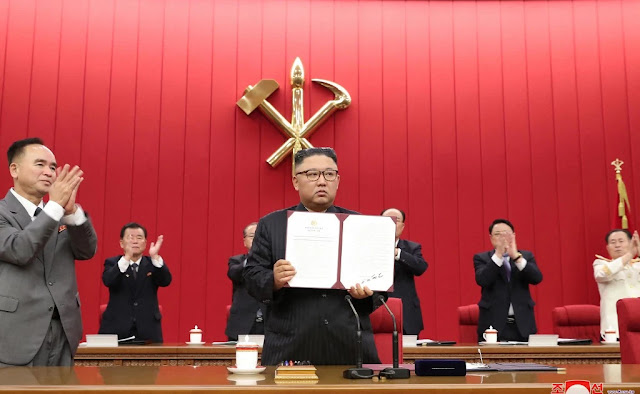 UMMATIMES - North Korean leader Kim Jong Un said his country must be prepared for the possibility of dialogue or confrontation with the United States. Kim's remarks were published by KCNA on Friday, June 18, 2021 and are Kim's first direct comments to the Joe Biden Administration.
Kim made the remarks on Thursday, June 17, 2021, during a meeting of members of the central committee of the Workers' Party, North Korea's ruling party. Previously, Kim was chosen to take several policies to overcome food shortages due to the Covid-19 pandemic.
KCNA reported that Kim had made a detailed analysis of the Biden administration's policies to Pyongyang. He has also prepared strategies and tactics for penetration with the United States.
“The Secretary General needs to make preparations, both dialogue and confrontation. To face it, we must be prepared to protect the dignity of the country and the interests of independent progress," KCNA reported.
The report did not explain in detail what actions North Korea might take.
According to Vipin Narang, a nuclear expert from the Massachusetts Institute of Technology, United States, Kim's comments continued that he was again pursuing a 'wait and see' action, at the same time refraining from provoking the Biden government.
“This seems to suggest that Pyongyang thinks it's currently in the United States and North Korea is waiting to see how to get Biden to run it. Given the reports of food conditions and Covid-19 in North Korea, one can assume Kim would prefer to avoid confrontation in the near future," Narang said.