Kremlin says coronavirus situation in Russia is getting more difficult

The Kremlin on Monday called the coronavirus situation in Russia increasingly "difficult" as the country faces another sharp rise in infections. 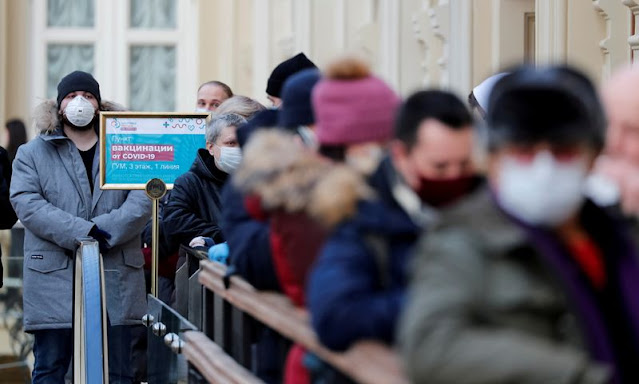 UMMATIMES - Speaking at a government meeting, Russian Health Minister Mikhail Murashko said 65 Russian regions were experiencing an increase in coronavirus cases.
"The incidence is increasing in more areas, initially there were around 30 areas, today we see about 65 areas experiencing an increase in the number of patients to some extent," Murashko said.
Kremlin spokesman Dmitry Peskov described the Covid-19 situation in his country as "difficult". Russia on Monday reported 17,378 new cases over the past 24 hours, bringing the total registered cases to 5.33 million, while active cases stood at 326,070.
A total of 440 people died over the past day, with the national death toll since the start of the pandemic standing at 129,801, the Covid-19 emergency task force said in a daily report.
The total number of people who recovered from the disease stood at around 4.87 million after 8,361 people recovered in the last 24 hours. The city of Moscow ranks first with the most cases, almost half of all infections - 152,805 being treated in the Russian capital.
According to Moscow Deputy Mayor Anastasia Rakova, the situation is not improving despite tougher measures announced last week. Last week, Moscow authorities closed children's playgrounds and playrooms, dining areas and zoos.
Restaurants, bars, clubs and discotheques cannot serve visitors from 11pm to 6am.
Sputnik V trial for teens ages 12-17
On Monday, Rakova announced that the first phase of trials of the Sputnik V vaccine for adolescents aged 12-17 would start in Moscow in July.
The research will be carried out in three stages, the first and second will be carried out in two different children's hospitals, and the third in the Moscow polyclinic.
In total, 350 people will take part in the trial -- 100 in the first and second stages and 250 in the third. Currently, officers are opening the initial recruitment of volunteers to take part in the first and second phase trials.