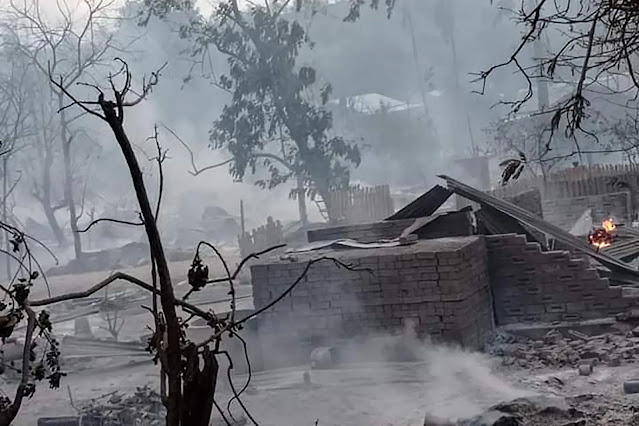 UMMATIMES - The military set fire to a village in central Myanmar after clashes with ethnic group troops. This incident caused two elderly people to burn to death.
State television MRTV reported that a fire broke out in Kin Ma, a village of about 800 people in the Magway region on Tuesday (15/6). After the fire incident, about 200 houses have been reduced to ashes and only 30 houses are still intact.
The large fire was recorded by NASA's satellite fire tracking system on Tuesday at 9:52 p.m. local time. Villagers, who spoke on condition of anonymity, said security forces burned the village after confronting coup opponents and at least two people were killed.
A 32-year-old volunteer helping displaced people from the village said two of the dead were elderly residents. They were unable to escape from their homes during the fire.
Volunteers said several people returned to the village on Wednesday (15/6) and found the body of the elderly. Most of the villagers remained hiding in the nearby forest.
Photographs and video taken after the fire in Kin Ma show a light haze of smoke over the village. In addition, burnt wooden planks, sheet metal, bricks, and cooking pots were scattered about. While there are some trees left and some photos show animal carcasses.
"Reports that the junta has burned entire villages in Magway and killed elderly residents show once again that the military continues to commit horrific crimes and has no respect for the Myanmar people," the British embassy in Myanmar said, citing ambassador Dan Chugg.
Western criticism of the military government has grown over its use of force against its opponents. But the United Nations and ASEAN were unable to take a united stance that would put more pressure on the coup leaders.
The Association for Assistance to Political Prisoners said security forces had killed about 865 civilians since the coup. Until this news was revealed, the military junta had not yet commented on the fire incident in Kin Ma village.