Mucus from Turkey's Sea of Marmara is neither Harmful nor Toxic 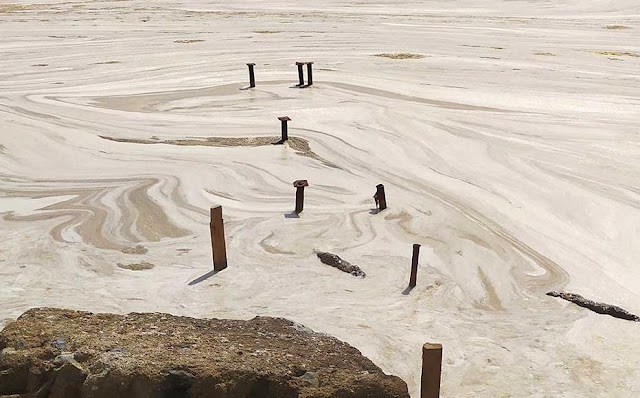 UMMATIMES - Turkey's Minister of Environment and Urbanization said that based on preliminary studies, the mucus in Turkey's Sea of ​​Marmara is not a hazardous waste and does not exhibit toxic properties. Speaking after a meeting of the Marmara Sea Action Plan Coordinating Board on Tuesday, Murat Kurum said if nitrogen levels in the Marmara Sea were reduced by 40 percent, the sea would return to normal.
"Increasing oxygen levels on the surface and seabed is one of our goals," Kurum said.
He noted that a total of 2,942 inspections aimed at minimizing pollution in the Sea of ​​Marmara were carried out in seven provinces, as a result of which fertilizer factories, thermal facilities and three shipyards were closed. Meanwhile, an administrative fine of TRY10 million (USD1.16 million) was imposed on 55 facilities and nine vessels.
The minister said he hoped scientific studies in the Sea of ​​Marmara could be completed by the end of July and the government would seek to declare the entire sea a protected area. Kurum added that a sustainable wastewater monitoring system will be introduced in all wastewater treatment plants to control all sources of pollution in the ocean.
"We will build a zero-waste system in all buildings in the Marmara area, without discrimination against public institutions and organizations, our city, our citizens," he said.
Last week, Turkish authorities announced a 22-point action plan to clean up the slime outbreak that covered the Sea of ​​Marmara in the northwest of the country. The slime, which mostly accumulates in Mudanya, Gemlik Bay, Gebze and its environs, the coastal areas of the Anatolian side of Istanbul, and around the Prince Islands, also covers part of the coast of the Sea of ​​Marmara.
The substance that covers the central coast of Yalova Province is spread by wind to the coastal areas of Cinarcik and Armutlu Districts and the city of Esenkoy, which is an important tourist center in Turkey.