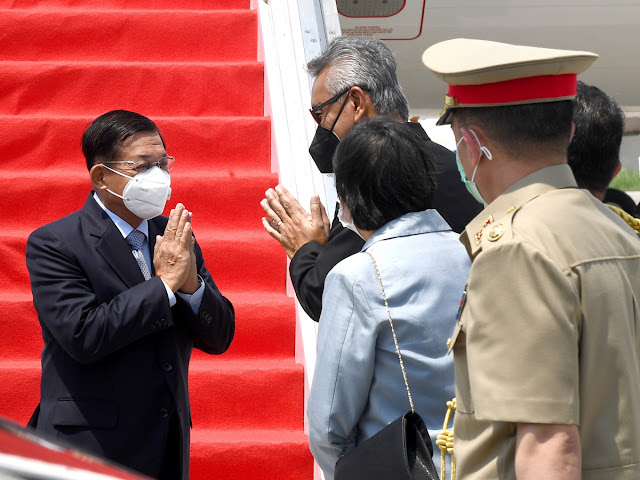 UMMATIMES - Myanmar's junta government claims to have taken a number of steps to restore democracy in the country, after the military staged a coup on February 1, 2021.
The junta-appointed Minister of Foreign Affairs, U Wunna Maung Lwin, conveyed this at the ASEAN-China foreign ministers meeting in Chongqing, China, Monday (7/6).
According to him, the only way to ensure a disciplined and pure democratic system is through the five-point program that was declared after the coup.
"Most of these points, such as the establishment of a new Election Commission to investigate electoral fraud, Covid-19 prevention, and economic recovery have been carried out with the aim of preventing delays in the implementation of future programs," state media, Global New Light of Myanmar, wrote on Tuesday.
Myanmar's military toppled the elected government of Aung San Suu Kyi, arguing that the election that won Suu Kyi the most votes was rigged.
Maung also mentioned the recent visit of the ASEAN Chair and Secretary to Myanmar, including discussing the five-point consensus agreed by the leaders of ASEAN countries regarding the Myanmar crisis.
The contents of the consensus include calling for an end to violence in Myanmar, establishing a special ASEAN envoy, and providing humanitarian assistance to Myanmar.
"Discussions were carried out in a friendly manner about developments in Myanmar, including the 5-point consensus from the ASEAN Leaders' Meeting, matters related to the provision of assistance in Myanmar," said the Global New Light of Myanmar.
The situation in Myanmar became one of the topics discussed in the ASEAN-China foreign ministerial meeting. Indonesia expects China's support for ASEAN to follow up on the five-point consensus on the post-military coup crisis in Myanmar.
Meanwhile, Singapore's Foreign Minister Vivian Balakrishnan said he was disappointed with the slow progress of resolving the crisis in Myanmar. According to a report by the Association of Assistants to Political Prisoners (AAPP), as of Monday, the death toll since the military coup in Myanmar has reached 857.