At the invitation of the Russian Minister of Defense, the Myanmar Military Commander attended a security conference in Moscow. Russia is one of the countries that abstained from a UN resolution to end violence in Myanmar. 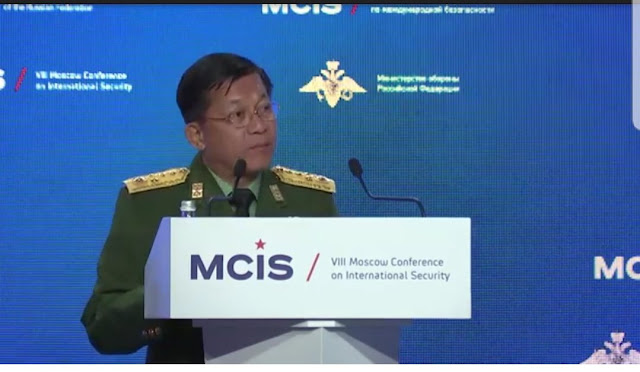 UMMATIMES - Myanmar's military chief, Min Aung Hlaing, arrived in Moscow on Sunday (20/06) to attend a security conference. This will be his second trip abroad since Hlaing seized power in a coup.
Myanmar has remained in turmoil since the military ousted civilian leader Aung San Suu Kyi in February.
The military leader was present at the "invitation of the Russian Defense Minister," Myanmar's state-owned media outlet MRTV reported. It was also reported that Hlaing was "greeted" by the Russian ambassador to Myanmar at the airport.
There have been no details on how long Hlaing will be in Russia, which is an ally and a major arms supplier to Myanmar's military.
The Myanmar embassy in Russia later confirmed Min Aung Hlaing's arrival to Russia's state news agency, RIA Novosti.
Russia abstains from UN resolution on Myanmar
Min Aung Hlaing's visit comes after the UN General Assembly took the rare step of calling for a resolution on Friday (18/06) for member states to "prevent the flow of arms" into Myanmar.
The resolution, which ultimately did not go to the extent of calling for a global arms embargo, also demanded that the military "immediately cease all violence against peaceful protesters."
The military government's crackdown on protesters opposing the coup has killed at least 870 civilians, according to local monitoring groups.
The resolution was approved by 119 countries, with 36 abstentions including China and Russia. Only one country opposed it, namely Belarus.
Min Aung Hlaing attended talks on the Myanmar crisis with leaders from the 10-nation Association of Southeast Asian Nations (ASEAN) in Jakarta in April. It was his first overseas trip since seizing Myanmar's power in a coup.
The meeting resulted in "five points of consensus" calling for an "immediate cessation of violence" and a visit to Myanmar by a regional special envoy.
However, the general said in a later television interview that Myanmar was not yet ready to adopt the plan.
A special envoy has not been appointed, and violence continues across the country.