Over the past decade, Pakistan has lost 25 percent to 30 percent of the nesting sites for the endangered green turtle species. Experts say that the causes include pollution in water areas and reduced natural habitats. 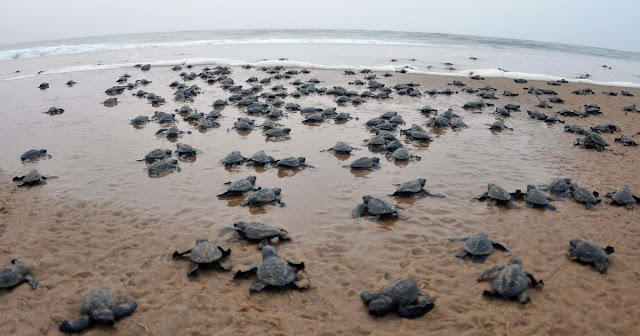 UMMATIMES - A senior official in the field of wildlife conservation, Adnan Hamid, cited two examples of beach locations, namely Hawks Bay and Sandspit. Both have long been favored nesting sites for rare green turtles due to the nature of the sandy beaches.
"The two beaches are one of the 11 largest green turtle nesting sites in the world. However, these places have been destroyed (as nesting sites) mainly due to uncontrolled construction in recent years," said Hamid.
Other reasons include increased water pollution and litter littering beaches, reduced natural habitats, and careless fishing. In addition to Hawks Bay and Sandspit, green turtles are also found on beaches in the southwest province of Balochistan.
Female turtles usually lay their eggs on the beach between October and February, then it takes 60 days for the eggs to hatch. The animals lay their eggs by digging holes in the sand, but because there is so much plastic, they can't dig and give up.
"Most of the solid waste left behind including plastic bags and diapers is a 'killer' for turtles. If consumed, it will cause suffocation and eventually kill them," said Hamid, quoted from the Daily Times page, Sunday (20/6).
He questioned why Pakistan's marine sites had not yet been declared a Marine Protected Area. Hamid, who is the deputy conservator at the Sindh Wildlife Department, and his team estimate the turtle population based on their nests.
According to Hamid, most fishing trawlers in Pakistan do not have special devices that allow accidentally caught turtles to escape when caught in fishing nets. He called it another reason for the decline in the turtle population.
Naveed Soomro of the global environmental organization International Union of Conservation (IUCN) agrees that green turtle numbers have declined in recent years, but not by much. In contrast, Muhammad Moazzam Khan, adviser to the World Wide Fund for Nature (WWF) Karachi, believes the turtle population is increasing.
Khan argues that there is no evidence to support the general perception of a declining green turtle population. According to the agency's estimates, there has been a five percent increase in the green turtle population in Pakistan over the last 10 years.
The benchmarks used include changes in fishing nets used by fishermen, coupled with fisherman training. "In 2014, about 28 thousand turtles were caught by fishermen, while at the end of 2017 there were only hundreds. It was all due to changes in fishing nets," said Khan.
In addition to the green turtle, wildlife authorities have found four other turtle species in Pakistan's marine waters, namely the tortoise, back-shell turtle, loggerhead turtle and hawksbill turtle. Apart from the increasing population of the olive ridley turtle, there are no recorded populations of the other three species.