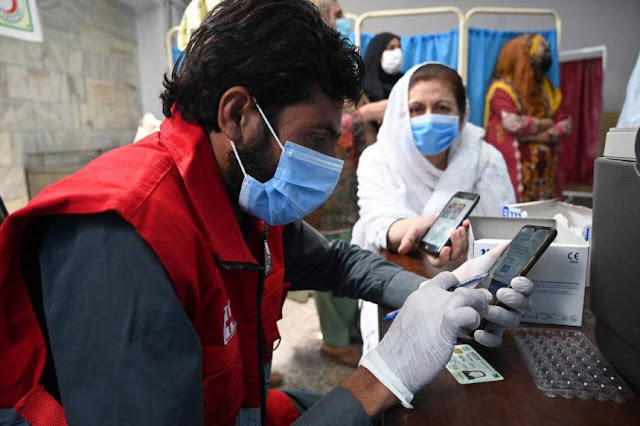 UMMATIMES - Pakistan will impose sanctions on people who refuse to get vaccinated against COVID-19. The plan, among the sanctions that will be imposed is to block cell phone services, to suspend the salaries of government employees.
These steps were deemed necessary to address deep skepticism regarding the COVID-19 vaccine and inoculation more broadly. Pakistan has long struggled with disinformation about vaccines that have so far proven safe and effective, including a vaccine to prevent polio.
In an effort to force people to get vaccinated, local authorities in two provinces, namely Punjab and Sindh, have announced plans to block cell phone services from citizens who refuse the COVID-19 vaccine. Sindh Information Minister Syed Nasir Hussain Shah said the decision not to get the vaccine was unacceptable.
"The government is trying its best to facilitate the public in getting the vaccine," said Shah, quoted by The Straits Times, Wednesday (16/6).
Authorities have not announced when the order will take effect or how it will be enforced. At the same time, the government in Sindh has directed its finance ministry to stop paying government employees who have not been vaccinated from next July.
However, since the plan was announced, reports of fake vaccination certificates have increased. In Pakistan, many parents refuse polio immunization for their children. Many mistakenly think that vaccines are dangerous and part of a US plan to sterilize their children.
The refusal makes Pakistan the last refuge for the polio virus in the world, apart from Afghanistan. Conspiracy theories about the side effects of the COVID-19 vaccine have so far been widespread in Pakistan.
"I have heard that people, after getting a shot of the coronavirus, will die within two years. This is the reason that in our large family of at least 25 people, no one wants to vaccinate themselves." ” said Ehsan Ahmed, a resident who works as a truck driver in Karachi.
The Pakistani government has targeted vaccinations for 45 million to 65 million people by the end of this year. Some time ago, the vaccine procurement plan was announced, with an estimated funding of up to 1.5 billion US dollars.
As of Tuesday (15/6), Pakistan has given full-dose vaccinations to around three million people. This number is still less than 2 percent of the population, since vaccination in the country began on February 3.