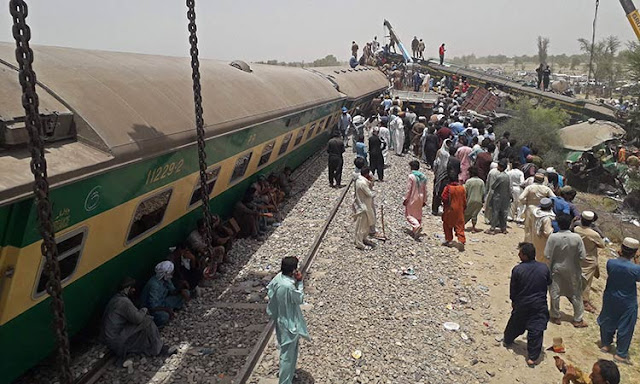 UMMATIMES - Pakistani railway officials say at least 63 people died in a train crash in Sindh province Monday. Local officials issued two lists of victims, including 12 who have not been identified.
It is predicted that the victims of the train accident will continue to grow along with the search for rescue teams. "We are worried that more people will die," said Deputy Commissioner of Ghotki District Usman Abdullah, as quoted by Al Jazeera, Tuesday (8/6).
Then more than 100 people were injured in the collision that occurred early Monday (7/6) near the town of Dharki in Ghotki, about 440 km (273 miles) north of Pakistan's largest city, Karachi. On Monday morning, the Millat Express derailed and minutes later the Sir Syed Express train crashed into it.
Both trains carried more than 1,000 passengers. "Some of the injured people are in critical condition," Abdullah said.
Heavy equipment arrived to open some of the carriages. More than 15 hours after the crash, rescue teams are carefully removing debris as they search for anyone who might still be trapped despite fading hope for the victims. Pakistan's military deployed troops, engineers and helicopters to help.
"This is the most colossal accident I have seen in about 10 years of service," said railway engineer Jahan Zeb.
Meanwhile, spokesman for the state-owned railway operator Syed Ijazul Hassan said the operation to find victims and bodies in the rubble had been completed and the line would reopen today, Tuesday (8/6). Pakistani Prime Minister Imran Khan expressed his deep sorrow over the tragedy and ordered an investigation into the rail security line.
Deadly train accidents are common in Pakistan. Allegedly it happened because the rails built since British colonial rule decades ago are rarely repaired.
It is not known what caused the Millat Express to jump its course. Even Interior Minister Sheikh Rashid called the route messy and very dangerous. The railroad tracks at the crash site were old and needed to be replaced.