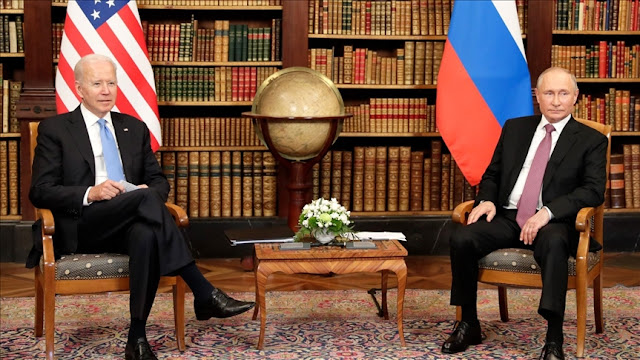 UMMATIMES - Russian President Vladimir Putin said Wednesday's meeting with his US counterpart was "constructive" and "substantive."
At a news conference in Geneva, Putin said Joe Biden and himself discussed issues of strategic stability, global security, regional conflicts, trade and cooperation in the Arctic region.
He also announced that the two countries had agreed to return ambassadors to their respective capitals.
Russian Ambassador Anatoly Antonov, summoned to his country after Biden's "killer" statement, will now return to Washington, while US Ambassador John Sullivan will also return to Moscow.
Regarding this, Putin said the US president had explained the comments during a telephone conversation, adding that he was "satisfied" with the explanation. In addition, the Russian Foreign Ministry and the US State Department will begin consultations on all diplomatic issues between the two countries.
"The Foreign Ministry started consultations throughout the complex on diplomatic lines. It seems to me that both sides are determined to find a solution," Putin said.
The Russian president stressed that Moscow and Washington bear a "special responsibility" for global stability as the two largest nuclear powers.
He praised Biden's "responsible" decision to expand the Strategic Arms Reduction Treaty (START), as well as the next steps in arms control to be discussed by the diplomatic side of the two countries with the involvement of relevant bodies.
Another area where Russia and the US agreed to hold additional consultations is cybersecurity, he said.