Putin Hopes His Meeting With Biden Is Productive 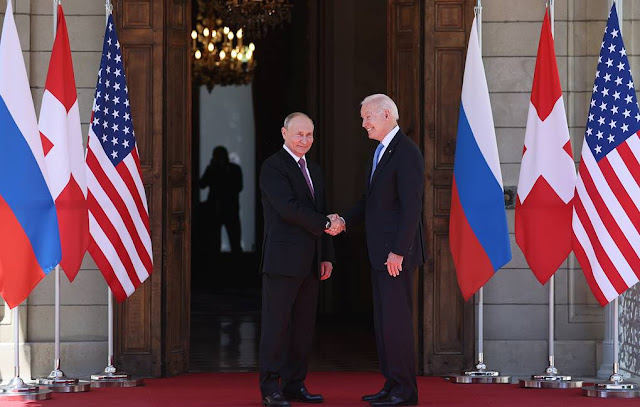 UMMATIMES - Russian President Vladimir Putin hopes his talks with US President Joe Biden will be productive. The two held a meeting in Geneva, Switzerland, Wednesday (16/6).
"Mr President, I would like to thank you for your initiative for today's meeting," Putin said in his opening remarks, reported the website of Russia's TASS news agency.
Putin says he knows Biden has a long way to go. Since the beginning of this week, Biden is known to have attended a number of meetings, namely the G7 summit in Cornwall, England and the NATO and European Union meetings in Brussels, Belgium. “Nevertheless, many issues that require top-level discussion have accumulated in Russian-American relations. I hope our meeting will be productive," Putin said.
Putin and Biden had a meeting at Villa La Grange. Russian Foreign Minister Sergey Lavrov and US Secretary of State Antony Blinken accompanied their respective presidents.
There are several issues that are said to be discussed by Putin and Biden, including strategic stability, cyber security, and handling the Covid-19 pandemic. According to Kremlin aide Yuri Ushakov, Putin and Biden will also discuss regional issues. The settlement of the Middle East, the situation in Syria, Libya, Afghanistan, the Korean Peninsula, and Iran's nuclear program will be some of the topics discussed.
They are also expected to participate in discussing the Ukraine crisis. "This is a topic that is agreed on in the agenda, but you are well aware that the president can touch on any topic at their discretion. Issues that were not agreed in advance and not indicated on the agenda can also be raised," Ushakov said.