Saudi Arabia released 20 endangered mountain goats in Baljurashi National Park. The area, located in the city of Al-Baha, has rugged mountainous terrain, an ideal habitat for the released species. 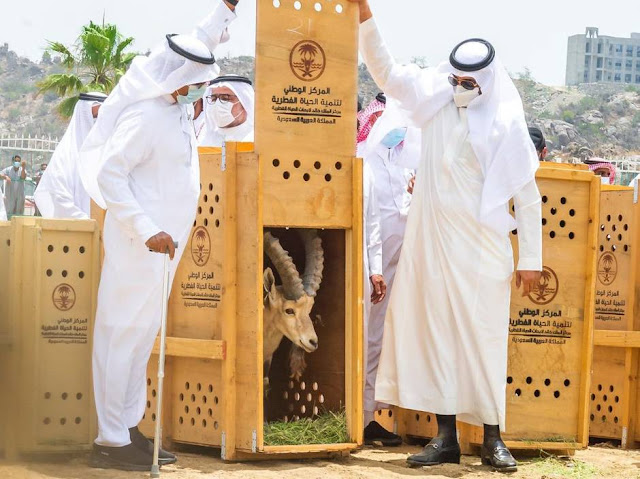 UMMATIMES - The releases are part of the National Wildlife Development Center's program to protect endangered animal species. How, by returning endangered species to their natural habitat.
The action is also expected to restore the balance of nature and make the national park more attractive to visitors. Tourists in Baljurashi can see rare animals from afar and take photos.
The governor of Al-Baha, Prince Hussam bin Saud bin Abdul Aziz, stressed the importance of conserving and restoring wildlife in the region. He also highlighted the need to raise awareness to achieve ecological balance.
This effort is in line with Vision 2030, which is the coordination of the central government with branches of the Ministry of Environment, Water and Agriculture. Likewise, the National Center for Vegetation Cover Development and Desertification Management.
The animal release event was attended by Deputy Regional Secretary of Al-Baha Abdul Moneim bin Yassin Al-Shehri; Mohammed Qurban National Wildlife Development Center CEO; and Branch Director of the Ministry Fahd Al-Zahrani.
Baljurashi National Park is one of the largest in the Kingdom of Saudi Arabia. After release, sustainable development and efforts to enrich biodiversity in Saudi are expected to continue.