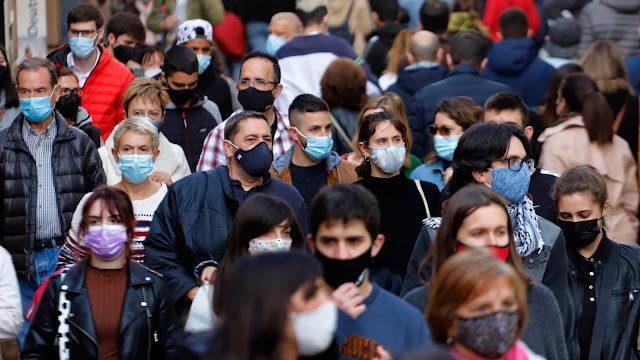 UMMATIMES - Spanish Prime Minister Pedro Sánchez said Spaniards would be able to stop wearing masks outside in the near future. However, he did not give an exact date for the lifting of social restrictions.
Masks have been mandatory on the streets and in public places since May 2020. While there are exceptions for children under the age of six, people who play sports, and those with health conditions that make their use difficult or dangerous.
"We will soon be able to stop wearing masks on the street," Sánchez said.
He explained that easing the use of masks could be implemented due to the speed of progress of the country's vaccination program. "Within a few weeks, 50 percent of the population will receive at least one dose," Sánchez said.
Sánchez added that Spain was on track to meet its target of vaccinating 70 percent of its 47 million population by the end of the summer. To date, health authorities have administered 33,632,590 doses of the vaccine, and 13,007,731 people have received both doses.
In April, the government tried to clear up confusion about whether people need to wear masks on beaches. The government reiterated its assurances that masks do not need to be worn during exercise, adding that they will not be mandatory for those who will be swimming in pools, seas, rivers, reservoirs or lakes, as long as social distancing can be maintained.
Meanwhile, French people will no longer be required to wear masks outdoors from Thursday (17/6), although they will still be required to use public transport, in sports stadiums and other crowded places. The curfew will end on Sunday.
The restrictions, introduced at the end of October, were relaxed as the health situation in France has shown a positive evolution, with the number of cases per 100,000 inhabitants having fallen to 40, the lowest since last summer. The number of patients in intensive care also fell below 2,000, from 6,000 in April.