Fighting against each other has become an escape for Tunisian youth from the anxiety of unemployment and the stress of the Covid-19 pandemic restrictions. 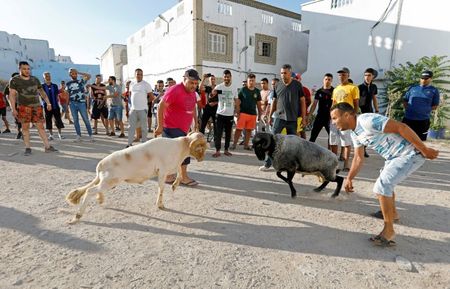 UMMATIMES - The rams stomped on the dust and charged, headlong with a crash that drew cheers from the crowd in the dusty wastelands near Tunis' Old Town.
The rams were raised by two groups of men in the Bab Souika district who say the fighting connects them to their environment and history, and an escape from unemployment, dreams of moving to Europe and Covid-19 restrictions.
In a vaulted cellar in a cobbled alley where they keep their rams, one group says some of them have jobs and the 2011 Arab Spring revolution that brought democracy to Tunisia did not change their lives.
"It's something that gets us off our feet," said Mourad, the owner of a ram he raises with dozens of friends who gathered there, mostly in their 20s. 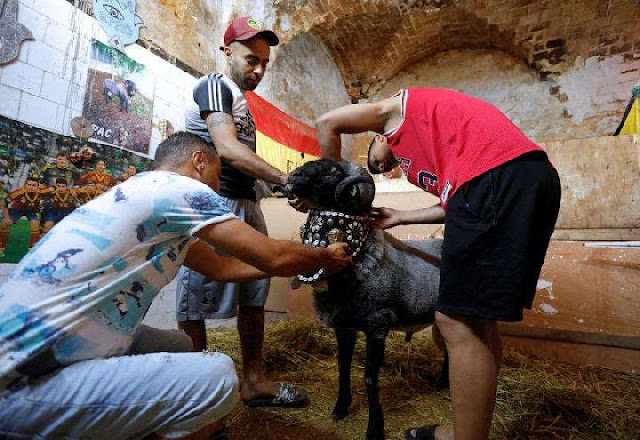 "Nothing has changed in this environment after the revolution. Prices have gone up and nothing has changed," said Mourad, quoted by Reuters, June 21, 2021.
Mourad, who owns a small cafe, declined to give his surname. He had lived in Bab Souika all his life.
Several youths from the neighborhood had made the perilous journey on smugglers' boats to Italy's Lampedusa Island in search of a better life, Mourad said.
Behind the gates Mourad and his friends' rams, whom they named 2Pac, chained to a ring on the cracked tile floor, scavenging for hay.
That afternoon's tussle was a first for 2Pac and the ram, with black heads and thick gray fur.
Mourad and friends bought the ram earlier this year and fed it to make it strong, he said. Now, they decided he was ready to fight.
Rival rams were nearby along narrow cobbled alleys lined with tall white houses with blue shutters and clotheslines fluttering on the balconies.
Mourad said he and another ram owner, Hussein al-Din Meslati, had known each other since childhood.
Meslati and some friends bought a creamy white ram named Lahmer Bousayala last year from a farmer in the mountains.
"If the ram has aggression, fire to fight back, we see that and we invest in it," he said.
Meslati said ramfighting, which often attracts illegal gambling, has a bad image among many Tunisians. But he says it gives him an inner connection to society.
The fight is set for the afternoon between the Old Town residences and the escarpment leading to the highway, where onlookers stand to get a better look.
Mourad and Meslati, with their friends, paced back and forth with their rams. Man and boy crouched
but near them while the women watched from the windows.
The rams fought, charged and broke their horns, as blood stained their wool. In the end the Mourad sheep lost, and he pouted when his friends cheered him on.
The audience drifted down the alleys towards Bab Souika. All that was left was a lump of blood drying in the dust in the long shadow of the sun.
Although popular in North Africa, ramfighting is restricted in Tunisia. The fighting requires police clearance which is rarely granted and animal rights groups have criticized the fighting as cruel.
Frustration has risen across Tunisia since the revolution due to the lack of jobs, high prices and deteriorating state services. Recently there have been protests being held among the youth of this impoverished district.
The International Monetary Fund estimates Tunisia's unemployment at over 16%, affecting youth, women and low-skilled workers disproportionately.