The Oath-taking of Israel's New Government This Week 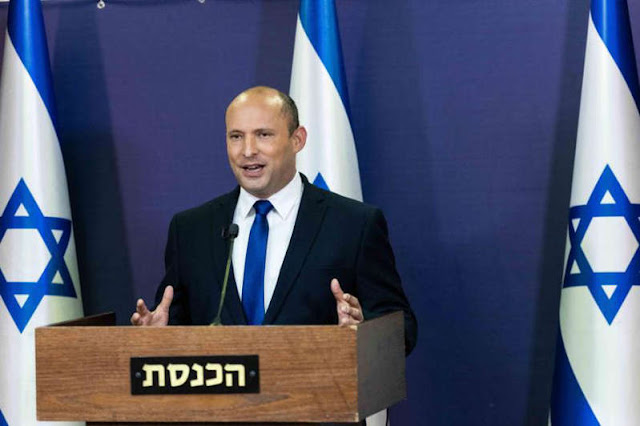 UMMATIMES - Israeli Prime Minister Benjamin Netanyahu will end his 12-year rule in five days after the formation of a new government by the opposition that forms a coalition of parties. The speaker of the Israeli Parliament (Knesset) Yariv Levin announced that a vote would be held for the swearing-in of a "government of change" on Sunday this week.
The "government of change" alliance consists of an eight-party coalition led by Naftali Bennett, who will be appointed by the Prime Minister, and Yesh Atid's leader, Yair Lapid. The alliance anticipates winning a majority of 61 to 59 votes on the ballot.
Vote support rose as a member of the Knesset from the Yamina Party, Nir Orbach, on Tuesday (8/6) will support the new coalition. The timing of the vote means that all coalition agreements must be formally submitted to the Knesset and announced by Friday this week.
As such, the pro-Netanyahu bloc will have 48 hours instead of the 24 hours required by law because the Sabbath holiday doesn't count, to scrutinize the agreement and pressure members of the far-right Knesset to jump before a vote of confidence. In a statement, Levin said a new Knesset speaker would be selected at the same session.
The Knesset usually does not meet on Sundays. Levin officially informed that the leader of the Yesh Atid party, Yair Lapid, had succeeded in forming a new power-sharing government within the time given to him by President Reuven Rivlin. However, at that time there was no set date for taking the oath, which by law must be done by June 14 at the latest.
Levin of the Likud party, a Netanyahu loyalist, has been suspected by critics of trying to time the swearing-in in a way that gives the prime minister's allies the greatest chance of thwarting the coalition. This was allegedly done by persuading prospective right-wing members to defect.
The law states that a vote of confidence must come within seven days of the speaker's official notification to the Knesset. In addition, members of the "government of change" have pressured Levin not to wait for the last possible day but to hold a vote on Wednesday.
Lapid also celebrated Levin's announcement on Twitter. "Is going!" his great-grandson was reported by the Time of Israel page, Tuesday (8/6).
"I thank Knesset Chair Yariv Levin for setting a date for taking the oath for Sunday. Knesset member Karine Elharrar will form a Steering Committee to set the schedule. Coalition agreements will be submitted as required by law," he tweeted.
"The unity government will come forward for the benefit of the Israeli people," he said. The new eight-party coalition that will oust Netanyahu's current transitional government will hold a narrow majority of the 61-member parliament from the 120-member Knesset, meaning the defection of one lawmaker could derail him.
On Monday (7/6), Lapid said the coalition would seek to unite the divided country and would also serve the entire nation, including those who vote for opposition parties. “This government will be good and will survive because it is based on the right things – on trust, on decency, on good intentions,” Lapid said at a meeting of the Yesh Atid faction.
The emerging government will first be led by Yamina party chief Naftali Bennett. He will be succeeded by Lapid as prime minister in August 2023.