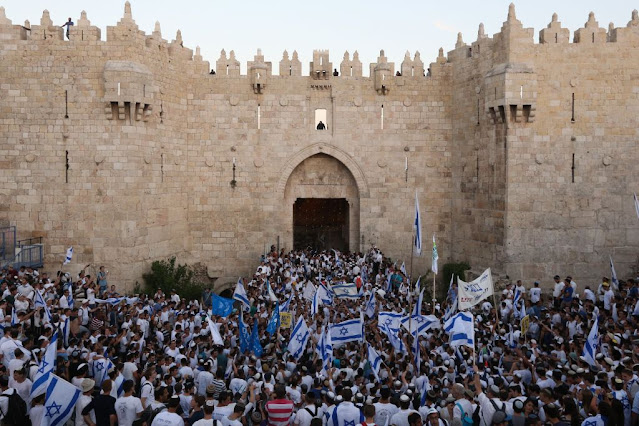 UMMATIMES - Thousands of right-wing Israeli nationalists staged a flag march in East Jerusalem on Tuesday. This again sparked tensions between Israel and Palestine because of provocative chants shouted by participants.
According to a Reuters report, nationalist songs echoed in the alleys where Palestinian traders closed their shops. Several participants chanted "Death to the Arabs" at the parade.
This was immediately responded by Yair Lapid, Israel's new foreign minister. "That's not Judaism, and that's not Israel, and that's definitely not what our flag represents," Lapid wrote on Twitter.
Israeli police in riot gear and on horseback try to minimize the possibility of friction between Israelis and Palestinians. They guarded the roads leading to the Damascus Gate to clear the area of ​​Palestinians before the demonstrators arrived.
They also prevented the crowd from approaching the Damascus Gate and rerouted the march to the outskirts.
Thousands of marchers danced and sang “the Israeli people live” while carrying the blue and white Israeli flag and filled the square in front of the gate, which is usually a gathering place for Palestinians.
“Look carefully at our flag. Live and suffer," said one protester, megaphone in one hand and cigar in the other. He shouted in Hebrew to Palestinian traders on the other side of the police barrier erected on an East Jerusalem street.
This march was held by Israelis to commemorate the anniversary of the occupation of East Jerusalem in the 1967 war. Later Israel annexed the territory bit by bit in a move that did not receive international recognition and regards the entire city as its capital. Meanwhile, Palestinians want East Jerusalem to be the capital of their future state that includes the West Bank and Gaza.
Last month, the Israeli-Palestinian confrontation in contested Jerusalem helped spark 11 days of cross-border fighting between Israel and Gaza's ruling militant group Hamas.