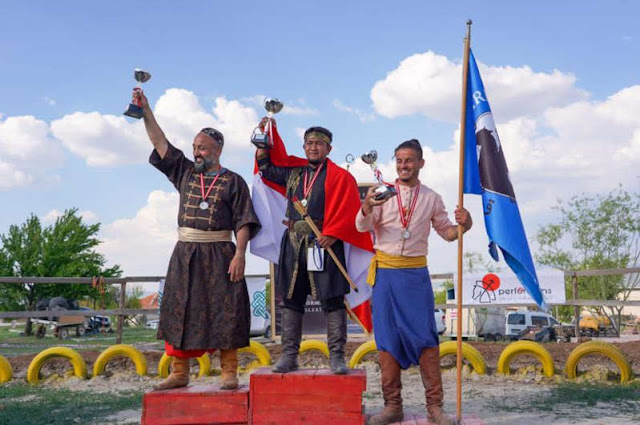 UMMATIMES - The tournament, which was held for the second time nationally in Turkey, was attended by 51 of Turkey's best equestrian archers. As for Indonesia, represented by the Indonesian Horse Archery Association (KPBI) received a special invitation to send 4 Senior and Junior representatives, consisting of Seniors: Kharisma Zaky and M Yahya Ayyas and Juniors: Arsa Wening Arrosyad and Arum Nazlus Shobah.
After going through a tight match, the Indonesian team dominated the championship podium.

The three winners from Indonesia are three brothers. Kharisma Zaky, the older brother of Arsa Wening Arrosyad and Arum Nazlus Shobah, who has a national ranking of equestrian archery in Indonesia based on the provisions of the World Horseback Archery Federation (WHAF) is at the top.
Equestrian archery or commonly called Horseback Archery is a traditional sport or in international association called Ethno Sport. KPBI itself represents Indonesia as a member of the world equestrian archery organization WHAF.
According to the General Chair of KPBI, ​​Alda Amtha, one of the keys to the success of the Indonesian Team is prayer and training full of strict discipline.
"Alhamdulillah, our victory in Turkey this year during the pandemic completes KPBI's achievements in the world equestrian archery forum where in 2019 we were also the second international champion held by the WHAF in Iran," said Alda in a press release to Republika.co.id, Monday (21/21). 6).
Alda also expressed his gratitude to the Indonesian government through the Ministry of Education, Culture, Research and Technology of the Republic of Indonesia's Directorate General of Culture for assisting with licensing so that during the KPBI pandemic, they could participate in matches in Turkey. KPBI itself is under the guidance of the Ministry of Education and Culture as an activist for traditional sports or Ethno Sport.
"Thank you also to all parties including the Indonesian Embassy in Ankara Turkey who always appreciates all KPBI activities in Turkey and the Indonesian Traditional Sports Games Committee (KPOTI) who both encourage ethno sports in Indonesia," said Alda.
Currently the Indonesian team is still in Turkey to prepare to return to the country. In accordance with the Covid-19 protocol, upon arrival in the country, the Team will undergo a quarantine period before returning to their respective homes and being declared Covid-19 free.