Tokyo Olympic Organizers Only Allow 10,000 People at Each Venue

Olympic organizers on Monday limited the crowd to just 10,000 for each Tokyo Olympic venue, days after experts warned that holding events without fans was the least risky option during the Covid-19 pandemic. 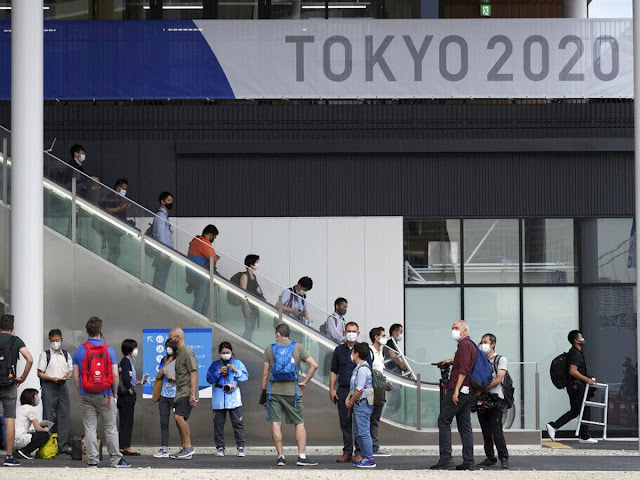 UMMATIMES - The decision highlights Japan's ambition to host a major multibillion-dollar sporting event, despite public opposition and deep fears of a spike in infections.
Japan has largely avoided the type of explosive coronavirus outbreak that has devastated other countries, but vaccine rollouts have been slow and the country's health system is under pressure.
The attendance limit for the Games, which are scheduled to start on July 23, will be set at 50% of the venue's capacity, up to a maximum of 10,000 people, organizers said, Reuters reported, June 21, 2021.
The limit could be further reduced after July 12, under the provisions of a state of emergency or other anti-infection measures, the organizers added.
Tokyo 2020 President Seiko Hashimoto previously said he was aiming for a limit of 10,000 people per venue. Spectators from abroad have also been banned.
The audience limit follows five-way talks between Tokyo 2020 organizers, the government of Japan and the capital, Tokyo, and international Olympic and Paralympic panels.
Prior to the meeting, IOC President Thomas Bach said vaccination rates for athletes and officials living in Olympic athletes' villages were now well above 80%, exceeding the IOC's initial expectations.
Japan's Olympics Minister Tamayo Marukawa urged the IOC to continue to disclose the vaccination rates of all overseas Olympic visitors, including those living outside the Olympic athletes' hometowns.
"For the sake of putting the public's mind at ease, we would like to continue to ask the IOC to proactively announce the vaccination rates of upcoming Olympic officials from overseas," said Marukawa.
Earlier on Monday, Prime Minister Yoshihide Suga said he would not rule out holding the Summer Olympics without spectators if the capital was in a state of emergency for Covid-19.
"If a state of emergency is declared then we cannot rule out the absence of spectators," Suga told reporters during a tour of vaccination sites in Tokyo.
Several leading Japanese health experts on Friday said banning spectators was the least risky option for holding the Olympics.
The Japanese public remains against holding the Olympics this summer, according to a June 19-20 poll by the Asahi News Network (ANN), with 65% of respondents saying they would like the event to be postponed again or cancelled.
Nearly 70% of respondents said they thought the Olympics would not be held safely, as the government and Olympic organisers advocate, the poll shows.
Last week, Suga decided to lift the coronavirus state of emergency for Tokyo and eight other prefectures that are experiencing spikes in infections.
The Japanese government maintained less stringent restrictions for seven of its nine prefectures, including Tokyo, until July 11, less than two weeks before the Tokyo Olympics open.