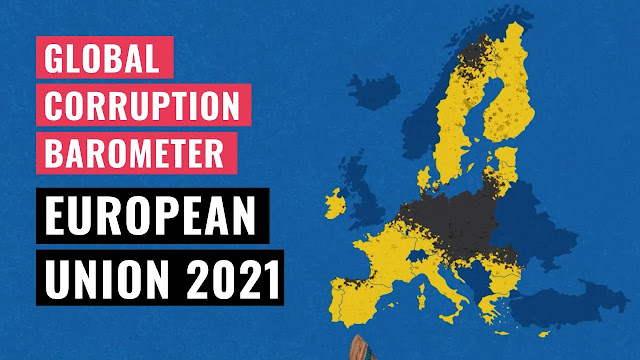 UMMATIMES - Transparency International's latest survey shows that at least 6% of EU citizens pay bribes to access health care during the coronavirus pandemic. 29% of citizens use friends or family connections.
The coronavirus pandemic has exacerbated the corruption situation across the European Union, Transparency International said as it introduced its latest survey earlier this week in Berlin. In its annual report on the Global Corruption Barometer for the European Union, the anti-corruption organization said that healthcare had become a "corruption hotspot", when citizens were in dire need of medical support and vaccinations.
Transparency International, headquartered in the German capital, Berlin, conducted a survey of more than 40,000 citizens living in 27 EU member states between October and December 2020.
The survey shows that 29% of citizens use personal connections such as well-connected friends or family to get medical treatment and 6% of residents pay direct bribes for health care.
The highest rates of bribery in healthcare were found in Romania (22%) and Bulgaria (19%), while making use of personal connections was most common in the Czech Republic (54%) and Portugal (46%).

Many respondents in the European Union also believed that their government was not dealing with the pandemic transparently. In France, Poland and Spain, 60% of respondents or more said their government was not transparent.
"Life can be lost when people with connections get a COVID-19 vaccine or medical treatment, before people with more pressing needs," the report warned.
"It is imperative that governments across the European Union redouble efforts to ensure a fair and equitable recovery from the ongoing pandemic," the report said.
The Transparency International survey said in Hungary and Poland governments have used the pandemic as an "excuse to hinder democracy" by enacting measures that weaken democratic institutions.
Many politicians see the health crisis "as an opportunity for profit," said Transparency International, pointing to a scandal involving several German lawmakers who made money as brokers procuring masks.

Perceptions of corruption in Germany increase during the pandemic

The Transparency International survey stated that in the European Union, Germany was one of the four countries that received the worst assessment of the corruption situation. 26.4% of respondents believe that the level of corruption in Germany has increased over the past year. Meanwhile, more than a third of respondents think that corruption in the German federal government has become a big problem.
While respondents in Germany generally have a high level of trust in the police and judiciary, 61.6% of respondents have the perception that the German government is largely controlled by a few large interest groups.
More than a third of German respondents believe that all or most business leaders in Germany are involved in corruption, while 57.5% suspect that companies use money or connections to secure public contracts.
"These are perceptual values," explains German Transparency Chair Hartmut Bumer. So it does not reflect the reality of the real corruption problem in Germany, he added.