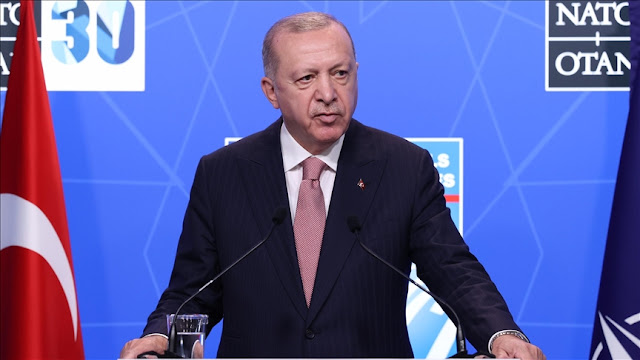 UMMATIMES - Turkish President Recep Tayyip Erdogan's proposal of a new trilateral meeting mechanism involving Turkey to protect Kabul Airport after the United States (US) withdrew from Afghanistan drew mixed reactions from experts in South Asia.
After a meeting with NATO leaders in Brussels, Belgium on Monday, Erdogan said Turkey also demanded the involvement of Pakistan and Hungary in a new mission in Afghanistan following the departure of US-led NATO forces.
Turkey, whose forces in Afghanistan have always consisted of non-combatants, offered to guard Hamid Karzai International Airport because questions remained about how security would be ensured along major transport routes and at the airport, which is the main gateway to the capital Kabul.
According to an announcement in April by US President Joe Biden, all foreign troops will leave Afghanistan by September 2021.
"We welcome President Erdogan's announcement. This is a very positive development," Mushahid Hussain Syed, head of the Pakistan Senate Defense Committee, told Anadolu Agency.
He said Islamabad and Ankara are key players for peace, security and stability in Afghanistan amid trust, friendship and deep-rooted relations between the two countries.
"US and foreign troops left Afghanistan in a dry state as in 1989 after the Red Army (Soviet Union) left the war-torn country," he said, adding that Pakistan had a strategic interest in Afghanistan's peace, security and stability.
He said the two countries have also been part of the Heart of Asia - Istanbul Process which aims to spearhead efforts to resolve decades of conflict through a politically negotiated settlement.
Meanwhile, Manoj Joshi, a political analyst in New Delhi, views Erdogan's proposal as "workable."
"I think it's workable because it's limited to airports. Also because Kabul is a non-Pashtun city where the influence of the Taliban is lower," Joshi told Anadolu Agency.
"Pakistan's involvement will make Turkey's mission easier because Islamabad has the ability to control Taliban logistics," he said, referring to the level of influence Islamabad has over the militia mainly because of the surrounding area.