The largest logistics center in the Gaza Strip was officially opened on Sunday (20/6) with the help of the Turkish Red Crescent. 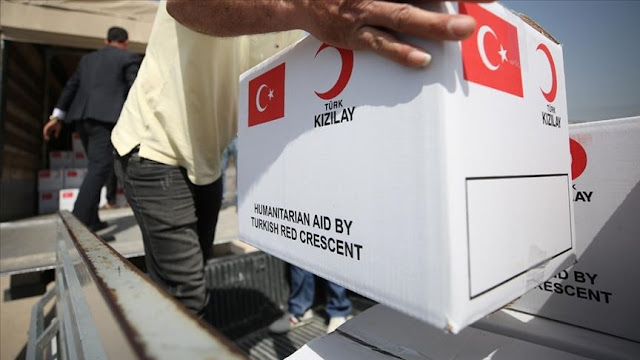 UMMATIMES - “Today, we opened the largest logistics center in Gaza, which we tried to open before, together with my dearest brother Doctor Yunus and our friends. It has become the largest logistics hub in Gaza both in terms of humanitarian and disaster relief,” said Kerem Kinik, head of the organization, during a visit to Gaza.
Kinik began his two-day visit by meeting his colleague Yunus al-Khatib, the head of the Palestinian Red Crescent. He told Anadolu Agency that he visited Gaza to evaluate the humanitarian situation in the region after Israel's latest offensive and to hold talks on the needs of Palestinians in Gaza.
Kinik said Israel's latest attack was the worst for Gaza, where water and electricity lines were destroyed and thousands of Palestinians were forced to flee their homes. He said he would discuss the issue of meeting humanitarian needs with a number of institutions and organizations in Palestine.
Kinik stressed that Gaza residents need urgent assistance and fuel must be supplied to generators to provide electricity to hospitals in the region. On June 16, Kinik, who held a series of meetings in the Egyptian capital, Cairo, to expedite relief efforts, said the process was complete for the first humanitarian aid convoy of 10 trucks that entered through the Rafah border crossing.
The Egyptian-brokered ceasefire took effect on May 21 and ended Israel's 11-day offensive on the Gaza Strip. The airstrike killed nearly 300 people, including women and children, and left a trail of destruction.
Health centers, media offices and schools were also targeted.