The UN representative in Sri Lanka said the sinking of the MV X-Press Pearl carrying chemicals caused significant damage to the earth. The accident is said to have released harmful substances into the ecosystem. 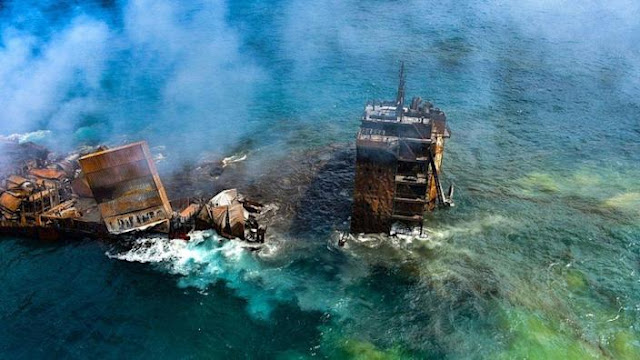 UMMATIMES - The Singapore-flagged ship sank off the coast of Colombo after it caught fire a month earlier. This raises concerns about possible environmental disasters.
The United Nations said it was coordinating international efforts and assisting Sri Lanka in assessing damage, recovery efforts and preventing similar disasters in the future.
"An environmental emergency like this causes significant damage to the planet by releasing harmful substances into the ecosystem," UN Resident Coordinator in Sri Lanka Hanaa Singer-Hamdy said in a statement on Saturday evening.
According to Hanaa, this accident has the potential to threaten the lives and livelihoods of residents in coastal areas.
A team of UN oil spill and chemical experts provided by the European Union has been sent to Sri Lanka to carry out an investigation.
Meanwhile, Sri Lanka filed a provisional claim of US$40 million with X-Press Feeders, the company that operates the ship, to cover some of the costs of fighting the May 20 fire.
Environmentalists are suing the government and X-Press Feeders for allegedly failing to prevent the country's worst marine environmental disaster.
Sri Lankan police have launched an investigation and last week, experts recovered the data recorder from the ship.
The Sri Lankan Navy believes the fire was caused by a chemical charge. The ship was found to be carrying more than 22 tonnes of nitric acid and other materials, most of which were destroyed in the fire. But debris including burned fiberglass and tons of plastic pellets have polluted nearby beaches.
A ship manifest seen by The Associated Press said the ship was carrying less than 1,500 containers, with 81 of them described as "dangerous" goods.
Of major concern is the approximately 300 tonnes of bunker oil used as ship fuel. But officials say it could have caught fire.
Tons of microplastic granules have reportedly flooded the famous beaches of Negombo, a popular tourist destination until the government banned people from fishing and sparked fears of ecological damage.
Local media reports said more than 50 turtles and eight dolphins had been found dead across the island since the boat caught fire on May 20. Sri Lanka's top environmental official, Anil Jasinghe, on Thursday linked the death to X-Press Pearl, but said he was still awaiting the final autopsy report.