The United States shipped 2.5 million doses of the Covid-19 vaccine to Taiwan on Saturday, more than three times the previously allocated one, as Taiwan was hit by its biggest outbreak. 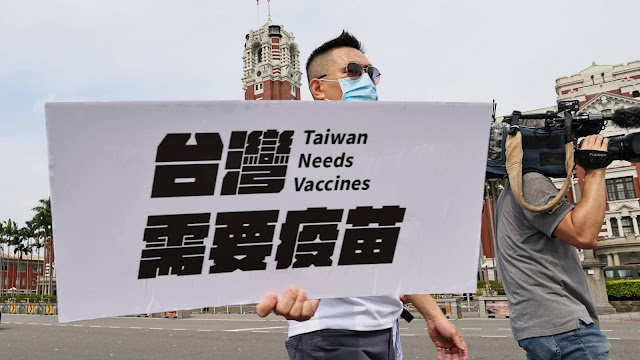 UMMATIMES - A vaccine grant to Taiwan would open up new tensions with China, which claims Taiwan as part of its territory. The United States competes with China in a geopolitical endeavor called "vaccine diplomacy".
The United States initially promised to provide 750,000 doses of the coronavirus vaccine to Taiwan, but increased the number after President Joe Biden promised to donate 80 million doses of the US-made coronavirus vaccine to the world.
While China has repeatedly offered to send a coronavirus vaccine to Taiwan, which has been battling a spike in domestic infections. Taipei has expressed concern about the safety of the Chinese-made vaccine.
The donated 2.5 million doses of Moderna Inc's vaccine will leave Memphis, Tennessee, on a Taiwan Airlines-owned China Airlines flight on Saturday morning and arrive in Taipei on Sunday evening, a senior US government official said.
He noted that prompt delivery was realized because experts from both sides were able to address regulatory issues.
US State Department spokesman Ned Price later tweeted that the plane carrying the vaccine had departed.
"We do not allocate this dose, or administer this dose, based on political or economic conditions. We are donating this vaccine with the sole purpose of saving lives," the senior US official said.
"Our vaccines are unbound," the official said, adding Taiwan had faced unfair challenges in its bid to procure vaccines in global markets.
A Taiwan deal to buy a vaccine from Germany's BioNTech SE fell through this year, with the Taiwanese government blaming the failure on pressure from Beijing.
China denies the accusations, saying Taiwan is free to get vaccines through Shanghai Fosun Pharmaceutical Group Co Ltd, which has contracts to sell BioNTech vaccines in China, Hong Kong, Macau and Taiwan.
"We believe that China's attempts to block purchases, for political purposes, are reprehensible," a senior Biden administration official said.
Taiwan's top officials welcomed the US move to send more vaccines than the initial allocation.
"What a view! What a great attitude!" Taiwan's Foreign Minister Joseph Wu tweeted late Saturday, linking to images of the vaccine being loaded onto the China Airlines Boeing 777 freighter at Memphis airport.
"Taiwan-US relations are very strong, & we will continue to work closely together in the fight against COVID19. The power for good will prevail!" he said.
Taiwan President Tsai Ing-wen also wrote on Twitter and was touched by the US move.
"Thanks to the US for this heartwarming gesture of friendship. This vaccine will go a long way in keeping Taiwan safe & healthy," tweeted Tsai Ing-wen.
Taiwan is trying to speed up the arrival of the millions of Covid-19 vaccines it orders, although infections remain relatively low, but there is an increase in domestic cases. Only about 6% of Taiwan's 23.5 million people have received at least one shot of the Covid-19 vaccine regimen.