South Korea's Ministry of Foreign Affairs on Tuesday (22/06) announced that the US and South Korea had agreed to consider ending the working group between the two countries that was formed in 2018. 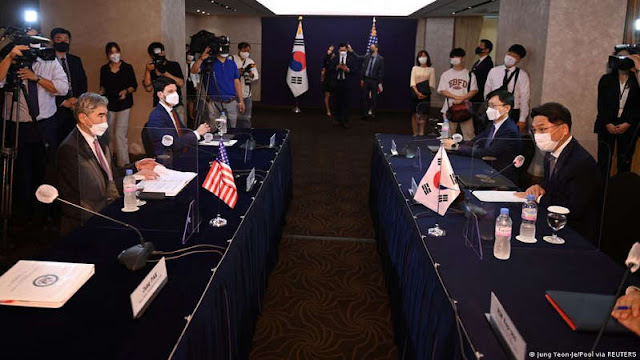 UMMATIMES - The United States (US) and South Korea have agreed to consider ending the operation of a working group between the two countries that coordinates North Korea policy, South Korea's Foreign Ministry said Tuesday (22/06), quoted by Reuters news agency. The deal came after the working group was believed to be a way for Washington to block inter-Korean projects.
During talks between the US special representative for North Korea, Sung Kim, and South Korea's top nuclear envoy, Noh Kyu-duk, the two agreed to "discuss ending the working group", while the two sides strengthened coordination at other levels, the statement continued.
The working group was formed in 2018 to assist the US and South Korea in coordinating their approaches to issues of denuclearization, humanitarian assistance, sanctions implementation, and inter-Korean relations amid a flurry of diplomatic relations with North Korea at the time.
The Biden administration's good intentions
Earlier last year, when asked about Seoul's plans for reopening individual tourism to North Korea, the then US Ambassador to South Korea, Harry Harris, said that "in order to avoid further misunderstandings that could trigger sanctions ... this through the working group."
Although Harris added that it was not up to the US to approve South Korea's decision, the statement caused controversy in Seoul and a former aide to South Korean President Moon Jae-in later told parliament that the working group was seen as a barrier to inter-Korean relations.
The Moon administration will see ending the working group as a goodwill gesture from US President Joe Biden, said Ramon Pacheco Pardo, an expert on Korean issues at King's College London.
"From a South Korean perspective, this is basically a mechanism for the US to block inter-Korean projects while Trump is in office," he said. "It would be a smart political move for the Biden administration to end it, while relations between Washington and Seoul will continue.
US awaits North Korea's response
Earlier on Monday (21/06) Sung Kim met with Noh Kyu-duk to discuss North Korea's denuclearization program.
"We continue to hope that North Korea will respond positively to our move and our offer to meet, anywhere, anytime, without preconditions," Sung Kim said in Seoul.
Negotiations between Washington and Pyongyang have stalled since then US president Donald Trump's meeting with Kim Jon-un in Vietnam in 2019.
Since Joe Biden was elected US president to replace Trump, North Korea has adopted a "wait and see" approach. Kimber said last week that North Korea was continuing to "prepare for dialogue and confrontation" with the US.