The United States (US) said it was waiting for a positive response from North Korea (North Korea) to continue dialogue and talks on denuclearization. So far, Pyongyang is said to have not responded. 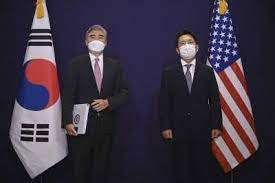 UMMATIMES - “We are still waiting to hear from Pyongyang for a meeting. Hopefully the dialogue shows that we will get a positive response soon," said the new US special envoy for North Korea, Sung Kim, on Monday (21/6).
Kim is currently on a visit to South Korea (South Korea) to meet officials in the country who handle security issues on the Korean Peninsula. He is scheduled to meet South Korea's nuclear envoy Noh Kyu-duk. There is also a trilateral session involving representatives of Japan.
In his first comments on the administration of US President Joe Biden, North Korean leader Kim Jong-un said his country was ready for dialogue and confrontation with the US. Washington considered Kim Jong-un's comments an "interesting signal". But Uncle Sam's country is still waiting for direct communication from Pyongyang to start any talks related to the denuclearization of the Korean Peninsula.
Denuclearization talks involving North Korea and the US have been stalled for more than two years. The second meeting between former US president Donald Trump and Kim Jong-un in Vietnam in 2019, failed to produce an agreement.
The failure was due to Washington's reluctance to lift its economic sanctions against Pyongyang. Meanwhile, North Korea, which has partially closed its nuclear facilities, has asked the United States to lift some of its sanctions before the denuclearization process resumes.