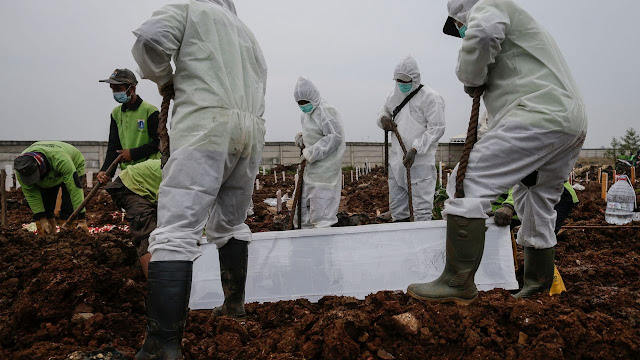 UMMATIMES - The Covid-29 Delta variant, which originally appeared in India, became the dominant variant globally. This statement was conveyed by the chief scientist of the World Health Organization (WHO) Soumya Swaminathan on Friday (18/6).
Swaminathan also voiced disappointment over the failure of the CureVac vaccine candidate in trials to meet WHO efficacy standards. Especially when highly infectious variants increase the need for new and potent vaccines.
The UK reported a sharp spike in infections of the Delta variant. Meanwhile, senior German public health officials predict the Delta variant will quickly become the dominant variant there despite high vaccination rates.
The Russian government blamed the surge in Covid-19 cases on vaccination doubts and "nihilism" after a record new infections in Moscow, mostly the new Delta variant, fanned fears of a third wave. "The Delta variant is on its way to becoming a globally dominant variant due to its very high transmission rate," Swaminathan said at a press conference.
The Covid-19 variant was cited by CureVac when the German company this week reported its vaccine had only 47 percent efficacy in preventing the disease. This figure is far from the WHO standard 50 percent threshold.
The company says it has recorded at least 13 circulating variants in their population study. Given that similar mRNA vaccines from Pfizer-BioNTech and Moderna recorded efficacy rates above 90 percent, Swaminathan said the world was expecting more in the CureVac vaccine candidate.
"Just because it's another mRNA, we can't assume that all mRNA vaccines are the same. Because each has a slightly different technology," he said.
He added that the surprising failure underscores the value of strong clinical trials for testing new products. WHO officials say Africa is still an area that needs attention, even though it only accounts for about five percent of new infections and two percent of deaths globally.
New cases in Namibia, Sierra Leone, Liberia and Rwanda more than doubled last week, according to WHO emergencies program head Mike Ryan, at a time when access to a Covid-19 vaccine was minimal. "It's one of those tracks that is very, very concerning," Ryan said.
"The sad reality is that in an era of multiple variants, with high transmission rates, we are leaving a large part of the population, the vulnerable African population, unprotected by vaccines," he said.