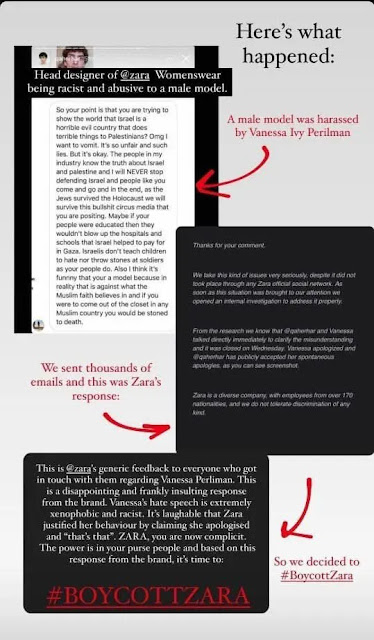 UMMATIMES - Fashion company Zara has come under fire after its head women's designer, Vanessa Perilman, sent a message insulting Palestine to Palestinian model Qaher Harhash on Instagram.
It started when Harhash uploaded pro-Palestinian content on his Instagram account and it seems Perilman responded to Harhash's upload via direct message last week.
"Maybe if your people were educated then they wouldn't blow up the hospitals and schools that Israel helps pay for in Gaza," reads a screenshot of Perilman's message to Harhash, quoted by CNN, June 17, 2021.
"Israelis don't teach children to hate or stone soldiers like your people did," Perilman's message read.
Perilman's comments come less than a month after the bloody 11-day conflict ended between Israel and the Palestinian militant group Hamas.
The Israeli military carried out aerial bombings that devastated Gaza, killing more than 200 people, including 65 children.
Hamas fired thousands of rockets into Israel, many of which were intercepted by Israel's defense systems. At least 12 people in Israel were killed.
"People in my industry know the truth about Israel and Palestine and I will never stop defending Israel and people like you come and go in the end," Perilman wrote.
Harhash's Instagram story containing screenshots of Perilman had expired, but Harhash later uploaded more screenshots of messages from Perilman, in which he questioned why Harhash had uploaded the screenshots to his Instagram story, and he said he received threats against his children.
"I'm sorry if this dispute started something more than it should have been, but now it's getting out of hand," Perilman wrote. "I actually received death threats against my children."
"I'm so sorry," he said, "I really hope you can forgive me."
Perilman has reportedly deleted his Instagram account.
In an NBC News interview from Berlin on Wednesday, Harhash said he was initially surprised that someone with so much influence in fashion as Perilman would engage in abusive conversation with him.
"I went into their profile, and I saw that she was a senior female designer at Zara," Harhash told NBC News. "So I was like, I'm backing out, I'm thinking I don't want to mess with anyone you know."
The post sparked online calls for disciplinary action against Perilman and a boycott of Zara. The post demanding Perilman be fired and calling for a boycott of Zara was shared tens of thousands of times on social media.
In a statement to NBC News on Tuesday, the company that owns the Zara brand, Inditex, said it "does not accept any lack of respect for any culture, religion, country, race or belief."
"Zara is a diverse company and we will never tolerate discrimination of any kind," Inditex said. "We condemn comments that do not reflect our core values ​​of respect for one another, and we regret the offense they have caused."
Inditex did not mention plans to fire or discipline Vanessa Perilman.
Harhash urged those in the fashion industry to fight anti-Palestinian sentiment.
"We usually see fashion brands stand up against anti-Semitism, but this is also the time we see fashion brands stand up against anti-Palestinianism," said the East Jerusalem-born model.
Harhash said Zara could use this opportunity to reach out to Palestinians and the larger Muslim community.
"However, when it comes to Zara, what I really expect is that they make statements that are not only directed at me, but also statements that are directed at the Muslims they have offended, the Palestinians they have offended," he said. Harhash.