20 People Disappeared in Avalanche in Japan

20 People Disappeared in Avalanche in Japan

Japanese television station NHK reported that two people were feared dead in a landslide triggered by heavy rains in the central city of Atami. NHK added that until now there are still 20 people who are declared missing. 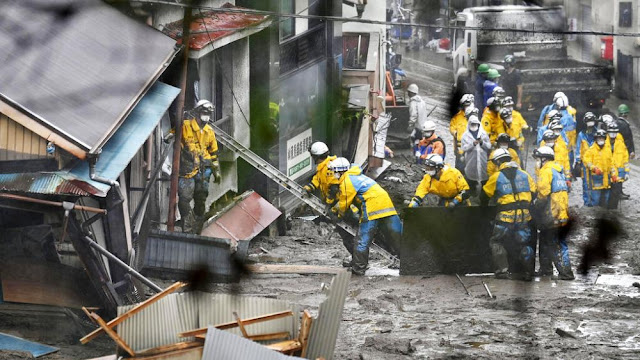 UMMATIMES - Prime Minister Yoshihide Suga asked people in affected areas to remain vigilant. He has formed a special task force to deal with this disaster.
"There may still be heavy rain and we have to be very careful," said Suga in his televised speech, Saturday (3/7).
The flood was a reminder of natural disasters such as earthquakes, volcanic eruptions, and tsunamis, something that often happens in Japan. Meanwhile, starting this month the capital Tokyo will hold the Olympics.
NHK reported that two people in Atami were found in a state of cardiac arrest. They have been taken to the hospital.
The television station showed houses submerged and collapsed as water flooded Atami with mud and debris. Photos on social media showed submerged cars and rescue workers on patrol pushing inflatable boats.
NHK said the Japanese military sent a rescue team to Atami, which is about 90 kilometers southeast of Tokyo. About 80 people have been evacuated. Citing Tokyo Electric Power, NHK added that the electricity in 2,830 homes was turned off.