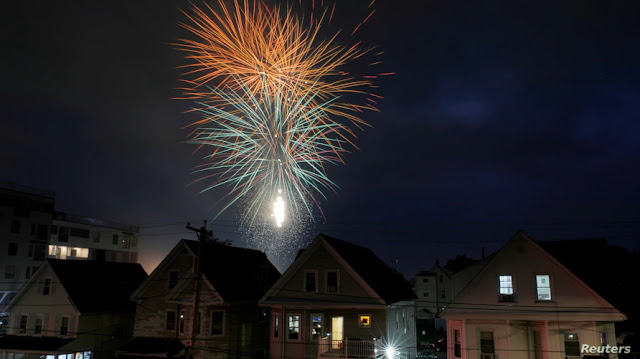 UMMATIMES - The Joe Biden administration plans to invite 1,000 people to the White House to celebrate July 4. They consist of essential workers and military personnel who are considered by Joe Biden to have contributed to controlling the pandemic in America. In addition, the Joe Biden administration will also celebrate a fireworks display that can be watched from the Washington National Mall.
"We are confident in our plans. Up to this point, there has been no consideration of changing plans for celebrating America's Independence Day," said US government spokeswoman Jen Psaki, quoted by Reuters news agency, Saturday local time, July 3, 2021.
Previously, there were concerns that America's Independence Day celebrations would be threatened due to the circulation of the Delta COVID-19 variant. These variants are often said to be easier to spread. However, with the increasing number of citizens who are successfully vaccinated, it is not surprising that America is confident about its celebration plans.
According to data from the New York Times as of July 2, 47 percent of Americans have been fully vaccinated, while 55 percent have received only one dose of the vaccine. The total doses of the COVID-19 vaccine that have been given are 328,809,470 of the total available doses of 382,636,520.
The data does show that Joe Biden's target of 70 percent of the population having received one dose of vaccine has not been achieved. Even so, this number is enough to be a grip for America to continue the celebration of July 4 even though the Delta variant threatens.
"The majority of Delta cases only occur in those who have not been vaccinated," Psaki said.
As per this report, there is no estimate as to how many people will attend the celebration of America's Independence Day in Washington. Generally, there will be thousands in attendance, both from within and outside Washington. Last year, when Donald Trump celebrated July 4, there were fewer people in attendance than usual and they were required to wear masks and keep their distance.
Meanwhile, regarding the COVID-19 pandemic itself, the trend of cases in America has shown a gradual decline since vaccination was intensified. From more than 200 thousand cases per day in January, now the number has dropped to below 20 thousand cases per day.