America, Japan, and the Netherlands Donate 7 Million Doses of COVID-19 Vaccine to Indonesia

America, Japan, and the Netherlands Donate 7 Million Doses of COVID-19 Vaccine to Indonesia

The Indonesian government has succeeded in obtaining donations for COVID-19 vaccines from various countries to support its vaccination campaign. One of them is from America. Yesterday, Friday, US National Security Adviser Jake Sullivan stated that Uncle Sam's country would provide 4 million doses of Moderna's COVID-19 vaccine to Indonesia in the near future. He conveyed this in a conversation with Indonesian Foreign Minister Retno Marsudi. 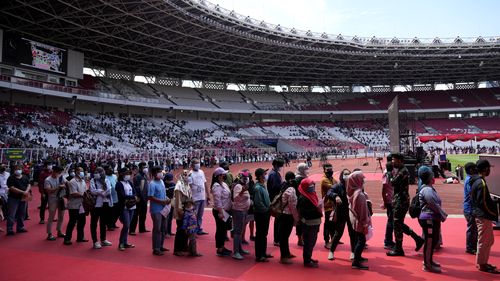 UMMATIMES - "Sullivan underlined the importance of the position of the Joe Biden - Kamala Harris administration in Indonesia, Southeast Asia, in the face of the COVID-19 pandemic. He also pledged to continue to support high-level cooperation," the US government press statement said. .
Sullivan said the donation was aimed at affirming America's commitment to helping Indonesia deal with the COVID-19 pandemic. The four million doses, said Sullivan, will be sent to Indonesia via COVAX. The head of the Food and Drug Supervisory Agency, Penny Lukot, said on Friday that his party had authorized the use of Moderna for emergency situations.
The delivery of Moderna is part of President Joe Biden's administration's commitment to sharing America's surplus COVID-19 vaccine. So far, the commitment is to send 80 million doses of vaccine to various countries, either through the COVAX mechanism or the direct mechanism.
Southeast Asia is included in the destination countries for American donations. Apart from Indonesia, other destinations for American shipments are the Philippines, Vietnam, Thailand, Laos, Papua New Guinea, and Cambodia. Analysts say what America is doing is vaccine diplomacy to counter China's growing influence in Southeast Asia.
In addition to donating a surplus of COVID-19 vaccines, America also plans to buy another 500 million doses of vaccine. The plan is that hundreds of millions of doses of the COVID-19 vaccine will be donated to African Union countries and 92 countries with lower-middle economies.
Besides America, the country that will send the COVID-19 vaccine to Indonesia is the Netherlands. On Friday, Foreign Minister Retno Marsudi said the Netherlands would send three million doses of vaccines plus therapeutic drugs. The names of the vaccines and drugs to be administered have not been disclosed.
Japan, said Retno Marsudi, also donated the COVID-19 vaccine. The number is not as much as the Netherlands or America, only 998,400 doses, and the first shipment has arrived in Indonesia. Retno said there would be a second delivery in the future.
"The second shipment, based on information from Japan, will follow later in the not too distant future," added Retno Marsudi.
The latest development, the UK also wants to send donations for the COVID-19 vaccine to Indonesia. Even so, the amount and when the delivery will be made are still under discussion until this news is written.