China and Egypt have signed an agreement to establish an intergovernmental cooperation committee. The aim of this is to strengthen bilateral relations between the two countries. 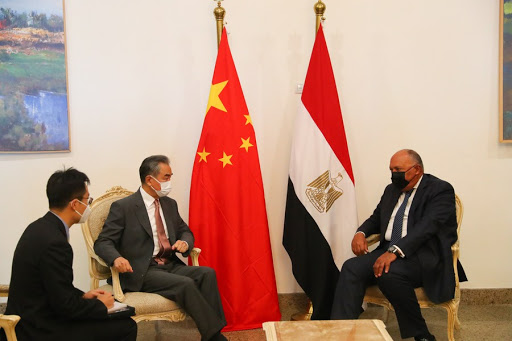 UMMATIMES - The agreement was signed by Chinese Foreign Minister Wang Yi and Egyptian Foreign Minister Sameh Shoukry. Wang is known to be on an official visit to Cairo. "Egypt is one of China's most important strategic partners among Arab countries, in the Islamic world, in Africa and among developing countries," Wang said, quoted by Xinhua news agency on Monday (19/7).
Wang said his country appreciates Egypt for its support on issues that are of core interest to Beijing. China, said Wang, also supports Egypt in safeguarding its sovereignty, security and development interests. He said China was ready to work with Egypt to deepen the alignment of development strategies.
This includes expanding cooperation in production capacity, infrastructure, renewable energy, aerospace, as well as new industries and technologies. Wang said China would also continue to support Egypt's local vaccine production to help the country fight Covid-19.
Meanwhile, Shoukry said his country adheres to the "one-China" principle and firmly supports Beijing's efforts to safeguard its sovereignty and security. Egypt also opposes foreign intervention in China's internal affairs over issues related to Hong Kong, Taiwan, Tibet and Xinjiang.
"Egypt is willing to work with China to strengthen cooperation in the fields of economy, trade, industry, science and technology within the framework of the Belt and Road Initiative (BRI), expand people-to-people and cultural exchanges and maintain communication on UN Security Council reforms and other issues. other international and regional issues," Shoukry said.
During the meeting, Wang and Shoukry also discussed several regional issues such as Syria, Palestine, and the Iranian nuclear issue.