Fed up with the stress of work, Guo Jianlong quit his job at a newspaper in Beijing. He moved to the mountains in southwest China to live a more relaxed life. 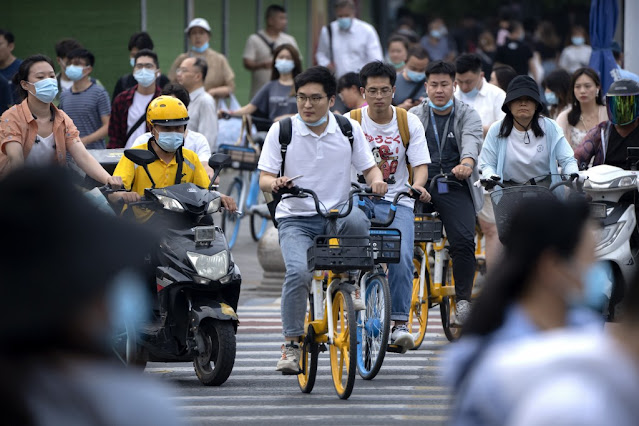 UMMATIMES - Reporting from the AP, Sunday (4/7), Guo joins a handful of Chinese urban professionals who are tired of the fast pace of life. The 44-year-old man chose to become a freelance writer in Dali, a city in Yunnan province known for its traditional architecture and beautiful scenery. He married a woman he met there.
"The job was fine, but I didn't really like it. What's wrong with doing things for yourself, not just looking at the money?" Guo said.
Guo's decision is known as "tang ping". A growing trend as an antidote to societal pressure to find work and perform well while working long shifts.
This trend echoes similar trends in Japan and other countries. Young people have embraced an anti-materialist lifestyle in response to gloomy job prospects and fierce competition for rewards in a shrinking economy.
Novelist Liao Zenghu states in Caixin, the movement tries to counter the horror cycle of high-pressure Chinese schools followed by seemingly endless work.
"In today's society, our every move is monitored and every action is criticized. Is there anything more rebellious than a lie flat?" Liao wrote referring to the term tang ping.
Urban employees complain that working hours swell to "996" or indicate that they have to be in at 9am and leave until 9pm on six days per week. "We generally believe that slavery has disappeared. Even just adapting to the new economic era," said a woman who wrote under the name Xia Bingbao or Summer Hailstones, on social media service Douban.
Xia rejects the argument that young people who choose a more relaxed life are giving up on economic success. "As resources are increasingly focused on a few people in the head and their relatives, labor becomes cheap and replaceable. Does it make sense to entrust your fate to small gifts from others?" he said.
Some elite graduates in their 20s who should have the best job prospects say they are tired from the hell of high school and university exams. They saw no point in making more sacrifices.
"The pursuit of fame and fortune doesn't appeal to me. I'm so tired," said 25-year-old graduate student Zhai Xiangyu.
While some professionals choose to retire early, for example Xu Zhunjiong. A human resources manager in Shanghai said he quit at the age of 45.
This age range is still a decade before the minimum legal retirement age for women. "I want to retire early. I don't want to fight anymore. I'm going somewhere else," Xu said.
It is not clear how many people have quit their jobs or moved from larger cities. However, the ruling Communist Party is trying to stave off this trend.
"The struggle itself is a kind of bliss. Choosing to lie flat in the face of pressure is not only unfair but shameful," said the Southern Daily newspaper published by the party.
A sign of the government's official displeasure with the trend is also evident in the disappearance of T-shirts, phone cases and other Lie Flat-themed products from online sales platforms.
Beijing needs skilled professionals to develop technology and other industries. China's population is aging and the working age pool has shrunk by about 5 percent from its 2011 peak.
Official data show China's economic spending per person has doubled over the past decade. However, many complain that the profits go largely to a handful of tycoons and state-owned companies. Professionals say their incomes are failing to keep up with soaring housing, child care and other costs.
Thousands of people vented frustration online after the Communist Party's announcement in May that the official birth limit would be relaxed to allow all couples to have three children instead of two. The party has imposed birth restrictions since 1980. This effort was previously made to contain population growth.
Minutes after the announcement, the website was flooded with complaints. The move does not help parents cope with child care costs, long working hours, cramped housing, job discrimination against mothers, and the need to care for elderly parents.