Protesters take to the streets in Brazil demanding the impeachment of President Jair Bolsonaro on Saturday (3/7). They also asked for more vaccines to be distributed to the public to combat the coronavirus pandemic. 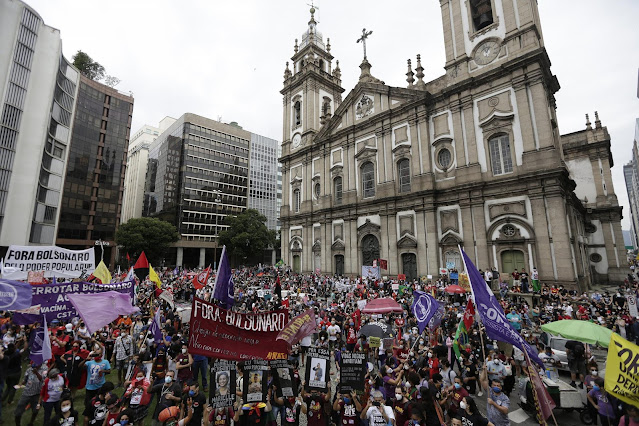 UMMATIMES - Brazil's Covid-19 crisis has been exacerbated by the slow rollout of a vaccine. "That's not denial, that's corruption," said a banner held by Marilda Barroso in Rio de Janeiro.
Since 2 p.m. the protests have drawn thousands of people in at least 13 state capitals. Local media reported citing protest organizers that demonstrations were scheduled to take place in 315 Brazilian cities and in 15 states. More protests are scheduled to take place in the afternoon, including in Brazil's largest city, Sao Paulo.
The initial protest was scheduled for July 24, but was brought forward after evidence of irregularities related to the vaccine deal was presented before a Senate committee. The committee investigated the federal government's handling of the pandemic.
The day before, Brazilian Supreme Court Justice Rosa Weber authorized the opening of an investigation by the prosecutor's office or PGR against Bolsonaro. An investigation will be launched into alleged irregularities in the procurement of a vaccine developed in India.
The president has been implicated in allegations of irregularities surrounding the 1.6 billion reais contract signed in February. The fund is to obtain 20 million doses by intermediary as the original vaccine maker, Bharat Biotech.
Brazil's Senate commission investigating the government's handling of the pandemic has cited suspicions about the exorbitant prices and corruption linked to the contract. After allegations of irregularities surfaced, the government suspended the contract.
Brazil's federal prosecutors and the office of the general financial watchdog or CGU are also separately investigating alleged irregularities in the deal. The case allegedly involves the head of government in the lower house of Congress, Ricardo Barros. Bolsonaro and Barros have denied wrongdoing.