Cubans Wait for Conditions to Change After Demonstration

Cubans Wait for Conditions to Change After Demonstration

Less than a week after a series of rare anti-government protests were dispersed by police and government sympathizers, there has been criticism from President Miguel Diaz-Canel, things seem calm in Cuba. However, many are wondering what will happen next in the country. 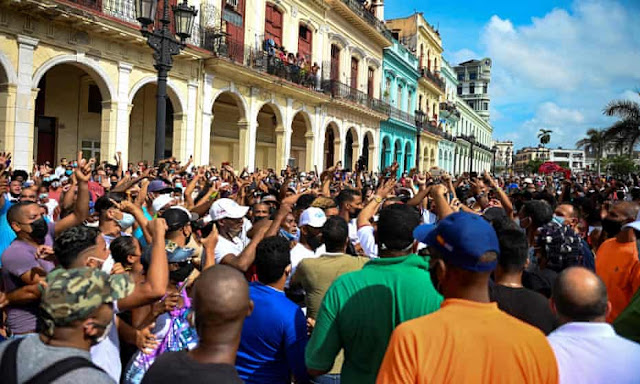 UMMATIMES - The protests began as thousands of Cubans marched on the promenade of Havana's Malecon and elsewhere on July 11. They moved to protest the shortage of food and medicine. The situation was exacerbated by blackouts and some even called for political change. The protests continued in smaller numbers for the next two days.
Diaz-Canel initially responded by searching for the culprit. He pointed to the economic sanctions of the United States (US), the economic impact of the coronavirus pandemic, and the social media campaign by Cuban-American groups. Later, he acknowledged some responsibility for the unrest caused by Cuban leaders.
With this in mind, Cuban Cabinet ministers announced various measures including permits for visitors to import unlimited food and medicine. The government also allowed the emergency registration of Cuban stock books by people outside their home countries.
"The Cuban government has just shown they can allow the entry of food and medicine without quantity or tariff restrictions during this time, but chose not to do so during more than a year of the pandemic," wrote the independent director of digital newspaper El Toque, Jose Jasan Nieves.
Street vendor Marlen Rodriguez was pessimistic about the government's announcement. "No medicine, nothing, no food," he said.
Cuban economist Omar Everleny Perez said the measures announced by the government were positive steps, but not enough. "Without influencing ideology, there is a lot of room in which the state can take action," he said.
Perez mentioned permission for private entrepreneurs to import goods without going through a state monopoly. These conditions allow foreign companies to set up retail markets or raise ceilings for agricultural prices to increase supply.
However, political analysts say the economic challenges are big. "I think the government is just trying to signal to the people that they understand their desperation and will try to alleviate some of the misery they are going through. The problem is that the government doesn't have a lot of resources to devote to doing that," said a Cuba expert at the American University in USA, William LeoGrande.
LeoGrande said the unrest in Cuba and the assassination of Haitian President Jovenel Moise had put the Caribbean back on US President Joe Biden's agenda. "There is no doubt that the demonstrations in Cuba and the assassination of the president of Haiti and the resulting unrest there have pushed the Caribbean to the top of President Biden's foreign policy agenda," he said.
The march turned violent. Police clashed with protesters, patrol cars were smashed, shops were looted, windows were shattered, stones were thrown, and violent arrests and injuries. Some Cubans upset by the vandalism and government support groups took to the streets and clashed with protesters.
There was one victim in the protests and the exact number of people arrested is unknown. Opponents of the government said on social media that the number was more than 100. On Friday, the United Nations High Commissioner for Human Rights, Michelle Bachelet, called for the protesters' release.