A total of 17 people died in a Philippine Air Force plane crash on Sunday, July 4, 2021. The accident occurred when the Lockheed C-130 plane made an emergency landing in Patikul, Sulu, southern Philippines, where it was destroyed and caught fire. The Philippine government has called the plane crash the worst Air Force accident in 30 years. 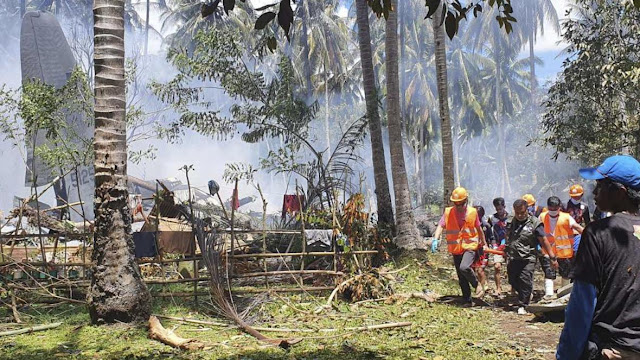 UMMATIMES - "The evacuation process is ongoing," said Philippine Defense Secretary Delfin Lorenzana, quoted by Reuters news agency.
Lorenzana continued, not all passengers on the plane died. In addition to the 17 victims killed, the evacuation team also managed to secure 40 injured victims. However, that was not all because according to the manifest there were 92 military personnel on board the plane when it took off from the Laguindingan airfield.
Regarding the cause of the accident, Lorenzana said it had not been investigated. He said the team at the location was still focusing on evacuation efforts rather than investigations.
Meanwhile, Military Commander Cirilito Soebejana suspected the plane had crashed because it failed to maintain control and missed the landing point. This was based on the finding that the plane was found a few kilometers from the Jolo airfield at 11.30 local time.
There were allegations that the Philippine Air Force plane crash was attacked. The base, where the plane crashed is not far from the part of the Philippines controlled by the Abu Sayyaf terrorist group and other militias. However, according to Philippine Military spokesman Colonel Edgard Arevalo, there is no indication yet to support that hypothesis.
"Investigations have not yet started...Currently we are visiting survivors who were immediately rushed to the 11th Infantry Division hospital in Busbus, Jolo, Sulu," said Arevalo
For the record, the Lockheed Martin C-130H Hercules aircraft with registration number 5125 was recently used in the Philippines. The aircraft was recently procured in collaboration with the US Defense Security Cooperative Agency. The aircraft were provided by the Philippine Military to increase the capability of its transport mission.
In total, two C-130 aircraft have crashed in the Philippines. The first accident occurred in 1993 with a death toll of 30. Meanwhile, the second accident occurred in 2008, for the civilian variant, with the death toll of 11 people.