Drone War in the Middle East is getting more intense, how to control it?

Drone War in the Middle East is getting more intense, how to control it?

Drone attacks in the Middle East are intensifying and expanding the conflict. Experts are calling for better rules for its use. But will more rules have an impact in the region? 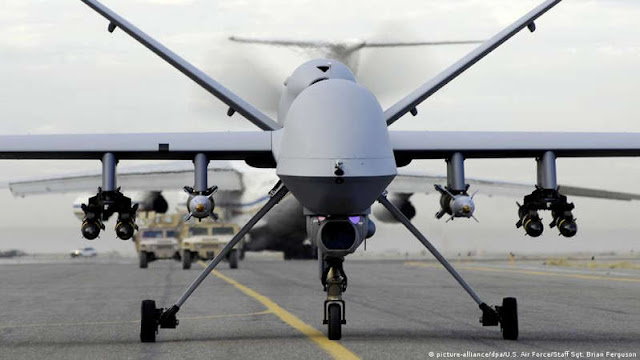 UMMATIMES - Last weekend, the US launched air strikes against Iran-backed militant groups near the Iraq-Syria border. According to a statement issued by US defense officials, the attack was in retaliation for drone strikes carried out against American troops on Iraqi soil.
The US military said that drones, known in military terms as Unmanned Aerial Vehicles (UAVs), had been used to attack personnel at least five times since last April. In the latest attack, an armed drone was detonated in a dining room used by Americans inside Baghdad airport. Another drone strike damaged an American hangar in northern Iraq.
Attacks with drones are becoming increasingly common in the Middle East, not only by the military to attack opponents, but also by non-state actors there, such as militia groups in Iraq, Yemen, and Syria.
Research from the Milan-based Institute for International Political Studies (ISPI) shows that Middle Eastern countries (excluding Israel) spent at least $1.5 billion on military drones over the past five years.

Drones guarantee superiority from the air

In the Middle East, Israel is the most advanced drone maker. But Israel rarely gives away or sells its technology to other countries, let alone those it considers a potential adversary. Most drones in the region come from Turkey, Iran, the United Arab Emirates and China as the main drone suppliers.
Iran has one of the longest running drone programs, says ISPI researcher Frederico Borsari. Hampered by international sanctions and difficulties maintaining or upgrading its warplanes, Iran has long understood that drones can add to their air power, Borsari said.
Delivering drones to the Middle East "is dangerous because it changes the military hierarchy in the region," said Fabian Hinz, a Berlin-based Middle East analyst who focuses on drones and ballistic missiles. "Before, you could predict conflicts, for example this country has so many planes and this much training, so you can estimate how strong they are. But drones and ballistic missiles obscure all that analysis.

One of the keys to solving the growing drone problem in the Middle East is better regulation. Agnes Callamard, former UN special rapporteur, warned that the world had entered a "second drone age ... marked by the uncontrolled proliferation of armed drones, which are more stealthy, faster, smaller and more capable of carrying out targeted kills than previous generations."
As of March 2020, there are more than 102 countries that have military drones, and an estimated 63 non-state actors. Agnes Callamard argued that countries should work together to create new rules that would include "firm standards for the design, export and use of drones" as well as the transfer of related military technology.
Would such a regulatory regime work in the Middle East? "When it comes to military strategy, it seems the most effective is to attack the points where these systems are being produced, or by getting those who are highly trained to build them," said James Rogers, professor of political studies and adviser to the UK government on drones.
Fabian Hinz and James Rogers agree that exports of military drone technology can still be controlled, but it is nearly impossible to regulate let alone stop the trade in drones to potentially criminally motivated non-state actors.