A total of 108 United States Army (US Army) soldiers who will participate in war exercises with the Army (AD) are now undergoing quarantine at the 600 Raiders Modang Infantry Battalion Headquarters in Manggar, 25 km from downtown Balikpapan, East Kalimantan. 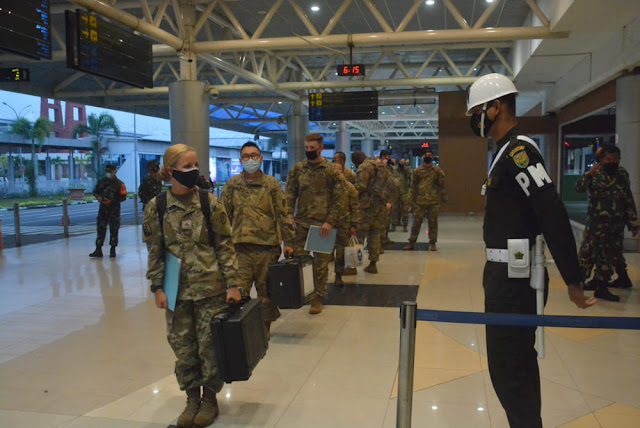 UMMATIMES - "In accordance with the health protocol set by the COVID-19 Task Force," said Head of the TNI-AD Information Service (Kadispenad) Brigadier General Tatang Subarna, Tuesday (27/7).
The soldiers must undergo the quarantine for eight days. They have been vaccinated in their country and then underwent a PCR test upon landing at Sepinggan Airport, Monday (26/7).
Kadispenad Brigadier General Tatang explained that the 108 US soldiers were part of the 122 US Army personnel who were involved in the war exercises codenamed Garuda Shield XV 2021 with the Indonesian Army.
"This exercise is the largest joint exercise in the history of cooperation between the TNI-AD and the US Army," said Brigadier General Tatang.
In the exercise, which will be held between August 4-14, 2021, the TNI-AD will deploy 250 soldiers with various combat skills. The Baturaja, Makalisung, and Amborawang Combat Training Center areas outside East Balikpapan will serve as platforms for the actions of the soldiers of the two countries.
"The purpose of this joint exercise is to increase the cooperation and capability of TNI-AD and US Army soldiers in carrying out operational tasks," explained Brigadier General Tatang Subarna.
Puslatpur Amborawang is approximately 15 km from the Yonif 600 Raiders Modang Headquarters. When visiting the combat training facility in August 2019, the TNI Commander Major Marshal Hadi Tjahjanto praised Amborawang.
According to the TNI Commander, Puslatpur Amborawang has a complete field, ranging from beaches, hills, and open fields. There are also swamps and forests. Amborawang is also quite far from settlements so it will not disturb the community.
"The location is very good and has everything we need for the Kogabwilhan puslatpur," said the TNI Commander.
The Joint Regional Defense Command (Kogabwilhan) is a new structure within the TNI where all dimensions of the TNI, namely Land, Sea and Air, join and coordinate.