The latest data on the death toll due to floods that hit Western Europe until Saturday (17/8) yesterday, surpassed 160 people. Germany and Belgium were the areas worst hit by the floods. 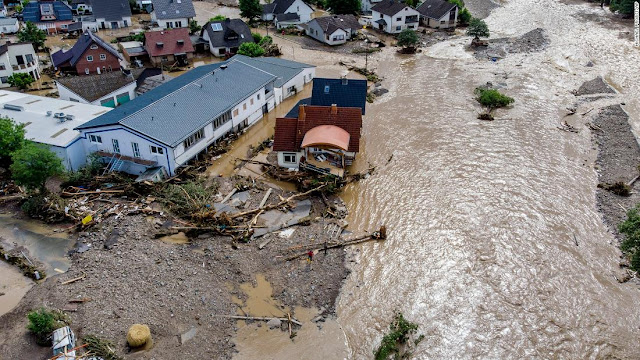 UMMATIMES - Citing the ABC, Sunday (18/7) said, in Germany, the death toll reached 141 people. This number is not yet of many others who were lost due to flooding. In Belgium, the Belgian National Crisis Center reported, at least 24 deaths were reported as of Saturday afternoon.
Until now, various areas in most areas affected by flooding, experienced blackouts of electricity and telephone services. Belgian broadcaster RTBF reported that around 17,500 houses were also reported to have no electricity and around 30,000 other houses had no access to drinking water, apart from about 3,500 houses that did not have gas and were in short supply. This is expected to last for several weeks.
Responding to bad weather and flooding that still hit most of the area, evacuations are still being reported with the involvement of hundreds of personnel. In the German city of Wassenberg, about 700 people have been evacuated due to a burst embankment on the River Run. Meanwhile, thousands of residents in several Dutch cities who were evacuated on Thursday and Friday were allowed to return home on Saturday morning.
As is known, countries in Western Europe are hit by record rainfall which causes rivers to overflow and trigger catastrophic floods. The affected areas as of this week are still in Germany, Belgium, the southern part of the Netherlands and Switzerland.
However, on Saturday, the water began to recede and efforts were underway to clear up any remaining debris and potentially find more bodies.