Clashes between supporters and opponents of Tunisian President Kais Saied erupted on Monday (26/7), amid tensions over the president's recent decision to dissolve the government and suspend parliament. 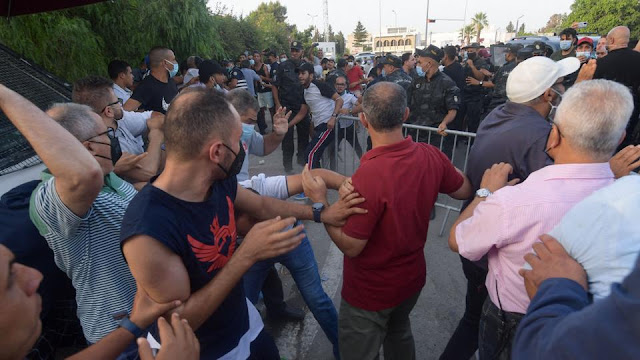 UMMATIMES - On Sunday (25/7), Saied toppled the government of Prime Minister Hichem Mechichi, frozen parliament and assumed executive authority with the help of the new prime minister. According to Anadolu Agency correspondent, Tunisian army and security forces erected a fence on the roads leading to the parliament building in Tunis to separate supporters and opponents of the Tunisian president.
The clashes turned violent, as soldiers tried to dissuade protesters from climbing the gates and entering the parliament complex. Supporters of the Ennahda movement - which holds 53 seats in the 217-member parliament - denounced Saied's decision as a "coup". On the other hand, supporters have hailed Saied's decision as a "revolution", especially after politicians failed to overcome the country's protracted crisis.
In his speech on Sunday (25/7), Saied said he would suspend the immunity of all MPs and take over the prosecutor's office. He claimed that he had made up his mind after consulting with Mechichi and Parliament Speaker Rached Ghannouchi.
Tunisia has been in a political crisis since January 16, when Mechichi announced a cabinet reshuffle but Saied refused to hold a new ministerial inauguration ceremony. Tunisia is seen as the only Arab country that has succeeded in making a democratic transition among other Arab countries that also have a history of popular revolutions in overthrowing the ruling regime, including Egypt, Libya, and Yemen.