The funeral of the late Haitian President Jovenel Moise did not go smoothly. The funeral in Cap-Haitien was marred by demonstrations by Moise loyalists who thought he was killed by the Haitian authorities. To control the situation, gunfire and tear gas were fired at the demonstrators which ironically created panic at the burial site. 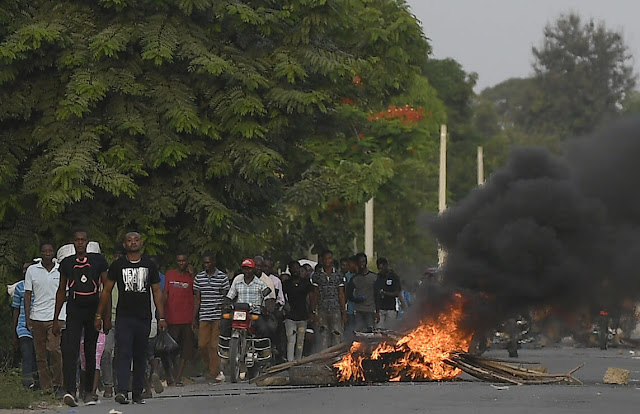 UMMATIMES - According to a Reuters report, a number of important guests were immediately taken into custody as soon as gunshots and tear gas explosions were heard. The important guests were rushed into a car which then took them away from the burial site. One of the important guests in attendance was the American Ambassador to the United Nations, Linda Thomas-Greenfield.
As per this report, there were no fatalities or injuries in the commotion. The demonstration lasted for a relatively long time in which demonstrators cursed the Haitian Police Chief, Leon Charles, who is considered the main mastermind behind the assassination of President Jovenel Moise.
"Where were the police on the day of the assassination of President Jovenel Moise," chanted demonstrators, Friday, July 23, 2021.
© Provided by Tempo.co
Haiti's interim Prime Minister Claude Jospeh walks with Haitian first lady Martine Moise, wife of slain President Jovenel Moise, after she arrived from the US, in Port-au-Prince, Haiti, in this undated photo obtained by Reuters on July 17, 2021. [ Prime Minister's Office/Handout via REUTERS]
The demonstration at the funeral site of Haitian President Jovenel Moise is not the first. A total of three days of demonstrations have taken place in Cap-Haitien, which is Jovenel Moise's hometown.
The continuing demonstrations about the murder of Jovenel Moise underscore how much remains unanswered about the case. Some of them are about who ordered the Colombian armed groups to kill Jovenel Moise, why there were no police on the night of the shooting, and why only Moise and his wife were the victims.
Jovenel Moise's wife, Martine Moise, hopes that her husband's murder case can be solved and answer all the questions that are circulating. She, who was present at the funeral wearing a black dress and hat, insisted that what she wanted was not revenge, but justice in Haiti's biggest murder case.