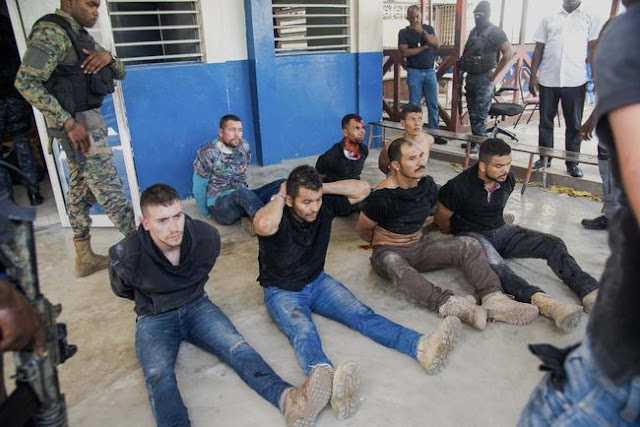 UMMATIMES - Jovenel Moise, 53, was shot dead Wednesday morning at his home in what officials say was a group of foreign-trained assassins, sending America's poorest country further into turmoil amid political divisions, famine and widespread gang violence.
Colombian Defense Minister Diego Molano said preliminary findings indicated that the Colombian suspected of involvement in the killings was a retired member of his country's armed forces, and pledged to support the investigation in Haiti.
According to a Reuters report, July 9, 2021, police tracked the suspected killers on Wednesday to a house near the crime scene in Petionville, a hilly northern suburb of the capital, Port-au-Prince.
The gun battle continued late into the night and authorities detained a number of suspects on Thursday.
Haitian Police Chief Leon Charles paraded 17 men in front of reporters at a press conference late Thursday, showing a number of Colombian passports, plus assault rifles, machetes, walkie-talkies and tools including bolt cutters and hammers.
"Foreigners came to our country to kill the president," Charles said, noting there were 26 Colombians and two Haitian Americans.
He revealed that 15 Colombians were arrested, as were Haitian Americans. Three of the attackers were killed and eight are still at large, Charles said.
Jorge Luis Vargas, director of Colombia's national police, said he had received requests for information from Haiti about six suspects, two of whom appeared to have died in a shootout with Haitian police. The other four were detained.
Haiti's minister of elections and interparty relations, Mathias Pierre, identified the Haitian-American suspects as James Solages, 35, and Joseph Vincent, 55.
A US State Department spokeswoman could not confirm whether any US citizens were among those detained, but US authorities have contacted Haitian officials, including investigators, to discuss how the US can help.
A 15-day state of emergency was declared on Wednesday to help authorities catch the killers.
However, interim Prime Minister Claude Joseph said on Thursday it was time for the economy to reopen and he had given instructions to airports to restart operations.
An angry crowd gathered on Thursday morning to watch the police operation take place, with some setting the suspects' cars on fire. Bullet casings were scattered on the road near the suspect's house.
"Burn them!" shouted some of the hundreds outside the police station where the suspects were being held.
Charles said the public had been helping police find the suspects, but he pleaded with residents of the sprawling seaside town of 1 million people not to take vigilante action.
Officials in the mostly French and Creole-speaking Caribbean nation said Wednesday that the killers appeared to speak English and Spanish.
"It was a fully equipped commando, with more than six cars and a lot of equipment," said Pierre.
Officials have not disclosed a motive for the killing. Since taking office as Haiti's president in 2017, Jovenel Moise has faced mass protests against his government, first over allegations of corruption and managing its economy, then over his increasing grip on power.