Hundreds of people took part in a bicycle race in Gaza on Wednesday, organized by the Palestinian Cycling Federation in a bid to create a mental release for the city's youth after the recent Israeli aggression. 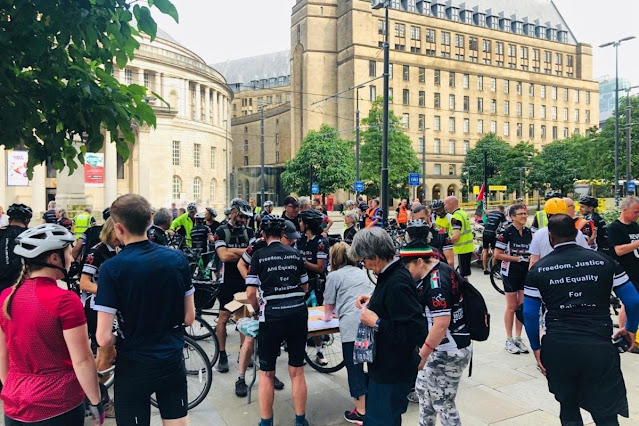 UMMATIMES - The race was launched along al-Rasheed Street with the participation of hundreds of men and women of various age groups and a number of amputees who lost their limbs in accidents or due to Israeli bombings.
The Amputee Cycling Committee, represented by a team of dozens of young amputees, participated in organizing the race with the aim of reintegrating people with disabilities into society and helping them return to their normal pre-amputation lives.
In an interview with Anadolu Agency, the deputy head of the Palestine Cycling Federation, Saeed Tamraz, said the race was the federation's first activity and signaled the start of the athletes' cycling season which will continue this summer.
Tamraz explained that one of the goals of the race was to carry out recreational activities and psychological release for young people, especially after the latest Israeli aggression on the Gaza Strip in May.
"Apart from being a sport, cycling is a means of entertainment and competition, and through racing, we want to create a psychological release for young people from what they suffered during the Israeli war about a month and a half ago," he said.
Tamraz gave an example of the participation of a number of professional cyclists in the competition as well as amateur and amputee participants. "Our goal is to convey the message after the aggression that the Gaza Strip is alive at all levels – sporting, socially and economically," he added.
From May 10-21, Israel launched airstrikes in the Gaza Strip, killing and wounding thousands of Palestinians, while Palestinian factions responded by firing thousands of missiles at Israeli cities. At least 260 Palestinians died and thousands more were injured in the attacks.