In a day, small hospitals in Bantul usually need 20 oxygen cylinders. But the last week that came only about 5 tubes. "We have to use it sparingly," said a doctor. 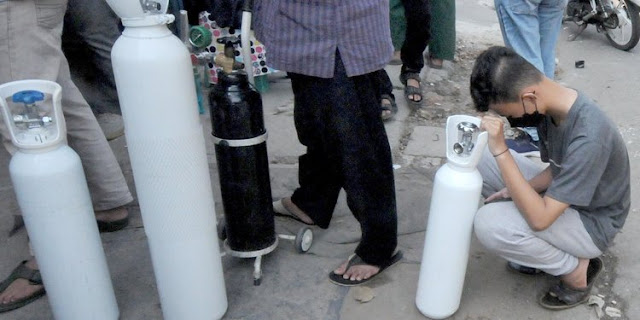 UMATIMES - A number of hospitals in Indonesia said they were overwhelmed with handling the booming number of COVID-19 patients. While oxygen deficiency was reported in some areas. Based on data from the COVID-19 Handling Task Force, until Tuesday (06/07) Indonesia again recorded a death toll of 728 people due to COVID-19, bringing the total national death toll to 61,868 cases. While the daily confirmed figure of 31,189 brings the number of confirmed cases to 2,345,018.
Hospital (RS) dr. Sardjito Yogyakarta even reported that at least 63 patients died within two days and 33 of them died after the oxygen supply ran out. Meanwhile in Jakarta, Governor Anies Baswedan said the number of funerals with the COVID-19 protocol increased 10 times in the May to July period.
The citizen reporting platform about this outbreak, namely LaporCovid-19, reported that at least 265 COVID-19 sufferers died while undergoing self-isolation at home. Most of them are trying to find health facilities and waiting in line to receive treatment at the emergency room at the hospital for the past month.
"This is the tip of the iceberg and must be anticipated immediately to prevent more deaths outside health facilities. In addition to strengthening health facilities and health personnel resources, there must be strict mobility restrictions to prevent the continued increase in the rate of transmission of cases which will increase the risk of death. ," said the initiator of the LaporCovid-19 platform, Irma Hidayana.

Doctor Sagiran, a doctor and administrator of the Indonesian Doctors Association (IDI) at the Nur Hidayat Hospital in Bantul, Yogyakarta, admitted that the oxygen supply was very low in the past week. The hospital was forced to send the patient home because he could not give oxygen.
"Indeed, there was not enough oxygen in the last five days, we even had to postpone all non-emergency surgery schedules," said dr. Sagiran. "In a day, for a small hospital like ours, we need 20 oxygen cylinders. Meanwhile, in the last week there were at least 5 oxygen cylinders, so we have to use them efficiently."
Meanwhile, he said, queues of patients were still seen snaking in several hospitals. Some even set up makeshift tents to treat patients.
"All (patients at) puskesmas and clinics are piling up, the bed occupancy rate for isolation rooms and critical patients reaches 100 percent," he said.

Tired but never back down

This situation has overwhelmed doctors in hospitals because many doctors have also been exposed to COVID-19 and cannot practice because they have to undergo self-isolation.
"We were forced to ask final year students and young doctors to help volunteer at the hospital," said dr. Sagiran added that in Bantul alone there were 32 doctors who were exposed to COVID-19.
He said the low awareness of the public in complying with health protocols made cases in Yogyakarta increase. Moreover, there are still many residents who hold wedding celebrations, recitation gatherings, and takziah.
"This is very ironic, yes, sad but I want to complain about how it is our duty. I really regret when we are on duty to never give up with limited capabilities, but on the other hand there are also people who hold a party. We must not give up," he said.
"Even though the situation has improved, the bed capacity is still full. Last month, eight patients died every day, now it's better, awareness of wearing masks has also increased," said dr. Rini.

Positive numbers are expected to be even higher

An epidemiologist from Griffith University in Australia, Dicky Budiman, again warned that the overall number of positive COVID-19 numbers could potentially be far higher than the number in official data reported due to low testing capacity, especially outside the city of Jakarta.
"The current data is only 10 percent of the actual actual data. It's no longer double or triple but five times more. Just 21 days ago, based on our calculations, there were more than 95 thousand cases. per day," said Dicky.
Dicky estimates that the peak of the second wave of Pandemic in Indonesia will be reached in July - August and will soon explode in the next few days.
He advised the government to immediately give booster injections for health workers considering the emergence of the Delta variant with transmission six times faster. "It could be with the same injection, Sinovac or with other vaccines that are considered effective against the Delta virus," he said.
Even though they have been vaccinated, the death rate for medical personnel continues to grow. Based on central IDI data as of June 28, as many as 1,031 medical personnel have died due to COVID-19 cases since March last year, 405 of whom are doctors. Meanwhile, from February to May 2021, 61 doctors died, 14 of whom were recorded to have received the full vaccine.

Spokesperson for Vaccination of the Ministry of Health, Siti Nadia Tarmizi said the government would accelerate the vaccination program and increase testing, early tracking to prevent the Delta variant from spreading further.
"This variant is so contagious, six times faster that people who don't wear masks can catch it in seconds," he said.
It will also continue to increase the supply of existing vaccines to meet the target of 400 million doses. "Currently Indonesia has 99.2 million doses and we have distributed around 45 million doses. We will continue to receive 400 million doses according to stages."
"To prevent the spread of hoaxes, we will also continue to educate the public, invite local community leaders and also socialize through health cadres," said Siti Nadia Tarmizi.
As of Tuesday, 14.2 million people had received the full dose of the COVID-19 vaccine. This number is still far from the government's target of providing a complete vaccine to 181.5 million people to create community immunity by April 2022.
Indonesia has received a total of 105.6 million doses of vaccine consisting of 94.5 million doses of vaccine from Sinovac, 9.1 million doses from AstraZeneca and 2 million doses of vaccine from Sinopharm.
"We have various kinds of vaccines, and they are sufficient to vaccinate 100 percent of the 18-year-old population in Indonesia," said Health Minister Budi Gunadi Sadikin in a discussion attended by journalists some time ago.
His party continues to accelerate vaccination in the community to suppress the transmission of the COVID-19 virus by setting a new target of 5 million vaccinations per day.
"This July, there will be 1 million vaccinations, then the target for August is 2 million per day and the presidential order if necessary to increase it to 5 million per day," said Budi. He ensured that in July, 31 million doses of vaccines would come and in August there would be another 45 million vaccines.
Regarding oxygen supply, the government said it had ordered 10,000 oxygen concentrator cylinders from Singapore and would shift 100 percent of oxygen supply for industry to supplies for medical use over the next two weeks.
"We have ordered 10,000 now and some have arrived using Hercules planes from Singapore and we will also take them from other places if we feel there is still not enough," said Coordinating Minister for Maritime Affairs and Investment, Luhut Binsar Panjaitan, at a virtual press conference in Jakarta.