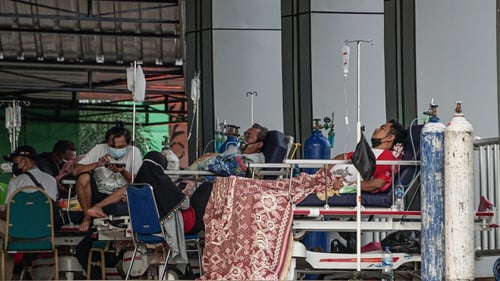 UMMATIMES - The surge in Covid-19 cases is part of a wave across Southeast Asia. Low vaccination rates occur in almost all of Southeast Asia. Vietnam, Malaysia, Myanmar and Thailand are also facing the biggest outbreaks and have imposed new restrictions, including lockdowns and stay-at-home orders.
In Indonesia, cases and deaths have skyrocketed in the past month due to the highly contagious Delta variant. This Delta variant sweeps across the densely populated islands of Java and Bali. In some areas, the coronavirus has pushed the medical service system over the line, although a number of hospitals have taken emergency measures to increase capacity.
On Thursday last week, Indonesian authorities reported nearly 57,000 new cases, the highest daily total, a sevenfold increase over the previous month. On Friday, the Indonesian government reported a record 1,205 deaths.
Some health experts doubt that the figures are considered very small compared to the spread in Indonesia, the fourth most populous country in the world. According to Dicky Budiman, an Indonesian epidemiologist at Griffith University in Australia, the actual number of cases is three to six times higher. This is due to low tracking.
In India, where the Delta variant was first identified, daily cases hit more than 414,000 in May, but then dropped to around 40,000.
Despite Indonesia's mushrooming caseload, the New York Times also highlighted statements by officials who said the situation was under control.
Due to the heavy burden of hospitals, many Covid-19 sufferers choose to stay at home for self-isolation. But many died at home.
Report Covid, a nonprofit group that tracks deaths from the disease, reports that at least 40 Covid patients per day are now dying at home.
Only about 15 percent of Indonesia's 270 million population have received a dose of the coronavirus vaccine. Of that amount, only 6 percent were fully inoculated.
Indonesia relies heavily on Sinovac Biotech's vaccine, which has proven to be less effective than other vaccines. At least 20 Indonesian doctors who were fully vaccinated with Sinovac died from COVID-19.