Israel Again Attacks Gaza under the Pretext of Launching Balloons

Israel Again Attacks Gaza under the Pretext of Launching Balloons

Israel attacked weapons manufacturing sites in the Gaza Strip on Friday (2/7). It was Israel's latest attack after a ceasefire in May. 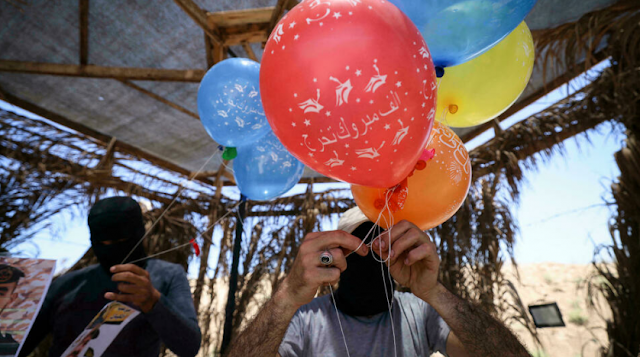 UMMATIMES - A security source with Hamas said the attack hit a training ground and there were no reported casualties. The Israeli military spokesman stated that the air strikes were launched in response to the launch of incendiary balloons from the Gaza Strip towards the surrounding Israeli settlements.
"In response to arson balloons fired into Israeli territory today, (military) fighter jets attacked a weapons manufacturing site belonging to the Hamas terror organization," the Israeli military said in a statement.
So far there is no direct indication that a Gaza-based group was responsible for the balloon launch. But Israel holds Hamas responsible for any actions.
It was the third time Israel has carried out air strikes on Gaza since 11 days of fighting in May. The conflict killed at least 256 Palestinians, including 66 children. On the Israeli side, 13 people, including two children, were killed by rockets fired from Gaza.
In recent days, Israel has relaxed restrictions to allow entry of Qatar-funded fuel, expanded Gaza's fishing zone, and allowed increased cross-border trade. There has been some turmoil since the ceasefire, including a series of balloon launches last month, which Israel responded with air strikes.
Following a firefight on June 18, Israel's army chief ordered troops to be prepared for various scenarios including the resumption of hostilities.