The Israeli army said Thursday that it destroyed the home of a Palestinian woman with US citizenship whose husband is accused of the fatal shooting of a Jewish student in the occupied Palestinian West Bank. 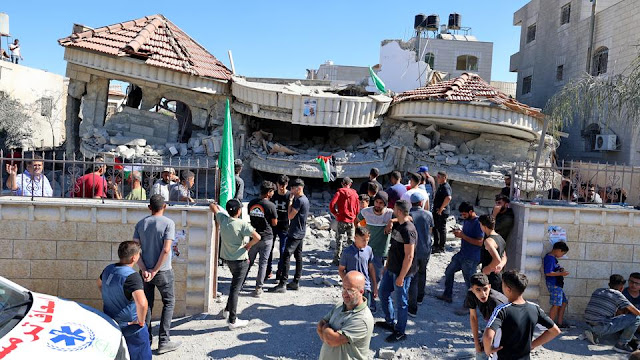 UMMATIMES - "Last night, the army destroyed the residence of terrorist (Montasser) Shalabi, in the village of Turmus Ayya, northeast of Ramallah," an Israeli military spokesman said.
The demolition took place even though the US did not support the policy. Shalabi, 44, was arrested by Israeli forces in May after he allegedly opened fire on passengers waiting at a bus stop at the Tapuah crossing south of Nablus in the West Bank, Palestine. The attack killed 19-year-old Yehuda Guetta, a student at a seminary in the Itamar settlement and injured two of his friends.
Sanaa Shalabi, 40, told AFP that troops arrived at 1am to place explosives around her house. He said the demolition lasted well into the night.
“This is our life. What happens to us is normal. We are ready for that," Sanaa said.
Sanaa calls her husband a hero. Shalabi did not live in the demolished house, according to the Israeli human rights organization Hamoked, which unsuccessfully opposed the demolition of the house before Israel's Supreme Court.
Executive Director, Jessica Montell, said the couple were estranged. Sanaa lives in the house with three of their seven children. The entire family is dual US citizens.
"The man accused of the attack doesn't live in the house, he lives in the US and he comes once or twice a year," Montell said.
Sanaa was completely uninvolved and knew nothing about the attack. "We think this should be a reason not to destroy," he said.
Montell said Shalabi suffered from mental illness.
The US has expressed its opposition to house demolition as punishment. A spokesman said the US Embassy was following reports of the demolition.
"An entire family's home must not be demolished because of the actions of one individual," a US Embassy spokesman said.
Meanwhile, the Israeli army said during the demolition around 200 rioters threw stones and launched fireworks at Israeli troops. The Israeli army responded to them by breaking up the riots.