Lebanese pro-Iran television station Al Mayadeen reported on the social media channel Telegram an Israeli cargo ship was attacked in the Indian Ocean. The ship, which was attacked by an unidentified weapon, was en route to the United Arab Emirates. 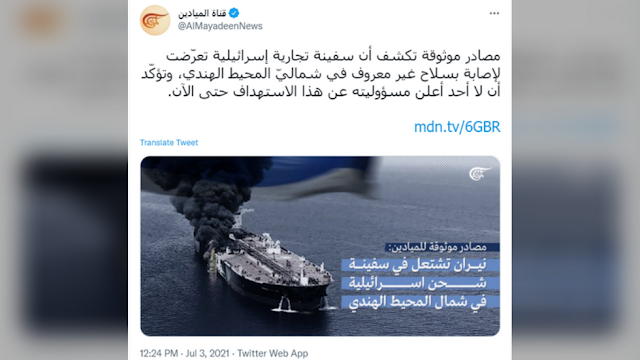 UMMATIMES - There has been no independent report confirming the report. As of Sunday (4/7), the Israeli government has not yet commented on the report.
Previously reported security expert at the Jerusalem Institute of Strategy and Security, Omer Dostri wrote in an article the repeated failure of Israeli forces to attack the Hamas group, making Israel necessary to occupy the Gaza Strip and overthrow the Palestinian Islamic Resistance Movement.
"Israel has the right to adopt a phased approach in dealing with the various threats it faces," Dostri said.