On Monday morning, many Jewish visitors went to the Al-Aqsa Mosque Complex or the so-called Temple Mount. Temple Mount Activists Association spokesman Asaf Fried said some of them were engaged couples and families with children ahead of their first haircut. 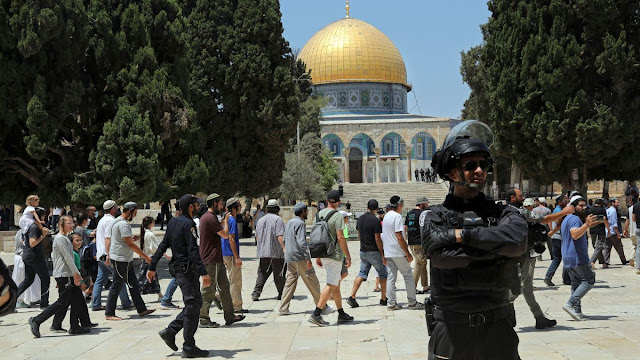 UMMATIMES - Temple head Rabbi Eliyahu Weber said visitors would hold prayer services there every day. As usual, they would pray the Shacharit, one of the three daily prayers of Judaism.
“Jewish prayer on the Temple Mount is very important. In fact, it cannot be expressed in words. The original place for prayer was the Temple Mount. Our ancestors prayed there. King Solomon and King Jehoshaphat talked about it," Weber said.
Weber explained, Rabbi Maimonides or Jewish Philosopher said the main aspect of prayer is praying before Him, in His Temple Mount.
About 1,600 visitors made their way to the site on Sunday, including some who participated in the prayer service and others who sang Hatikva.
The move led to protests from the Egyptian and Jordanian Foreign Ministries, the Palestinian Authority, and the Ra'am (United Arab List) Party.
Previously, in 2019, Weber had worship services on the Temple Mount secretly every morning and evening. Under the agreement, non-Muslim visits are allowed, but only Muslims can pray.
The High Court has ruled that Jews have the legal right to pray on the Temple Mount. However, the police usually impose a total ban on Jewish prayer on security grounds that such an act would lead to Arab unrest.
During the tenure of former Minister of Public Security Gilad Erdan, police softened their attitude towards Jewish visitors and did not stop those involved in small Jewish prayer services from the site.
Erdan, who served from 2015 to 2020, made several changes to the responsible police personnel and police procedures on the Temple Mount. Another Temple Mount activist, Elishama Sandman, said there had been no real change to the police's approach to Jewish visitors since the new government and Public Security Minister Omer Bar Lev took office.