Malaysians Raise White Flags Due to Hunger During Covid-19 Lockdown

Malaysians Raise White Flags Due to Hunger During Covid-19 Lockdown

This week the white flag has been circulating on Malaysian internet networks as the government implements a nationwide lockdown to control the spike in the country's worst Covid-19 outbreak. 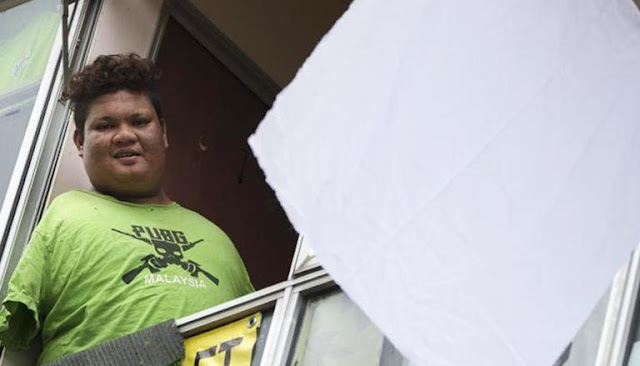 UMMATIMES - In Petaling Jaya, on the banks of the Way river, the bamboo gate of the brick house is affixed with a white flag with long poles.
Jambu Nathan Kanagasabai, a 64-year-old man, put up the white flag on the morning of July 1 after seeing a post by a local retail chain offering food parcels to those in desperate need of help.
Not long after, passersby took note of his plea and alerted the local village committee.
"The chairman of the committee offered my father cash, but he only needed food because he was reluctant (embarrassed)," said Jambu Nathan's daughter, Vani, quoted by Channel News Asia, July 7, 2021.
Jambu Nathan, his wife and sister share a house in a Malayan Emergency era settlement. He used to earn only about RM1,300 (Rp4.5 million) every month as a security guard for a goldsmith's shop.
Jambu Nathan is one of the people affected by Malaysia's total Covid-19 lockdown. And the white flag campaign has attracted attention, as the vulnerable can no longer endure hunger amid restrictions.
The campaign, which was launched on social media recently, says people should send a "white flag" to show that they need help, especially in terms of need due to the country's total lockdown, according to Free Malaysia Today.
"Raise the white flag if you need help, no need to beg or feel ashamed. Don't take any action that can harm yourself and your loved ones," reads the appeal circulating on Malaysian social media.
The campaign was widely accepted by netizens who provided moral support and assistance to those whose income was affected during the Covid-19 pandemic.
A number of parties answered the call for the white flag. A group of Malaysian students have created an app to help people find food banks as well as white flag locations where they can send aid.
Sidharrth Nagappan, Shaun Mak, and Cornelius Pang, created the app in just four days to cope with the growing demand for help due to the economic impact of the Covid-19 pandemic, the Malay Mail reported.
Inspired by the White Flag relief movement, the app was originally called the White Flag App when it launched on July 4 before changing its name to Sambal SOS yesterday.
The new name was an ode to the simple nasi lemak.
"In difficult times like these, a packet of warm nasi lemak with sambal is not just a Malaysian specialty, it's a monument of support and a sense of community," said Sidharrth, Mak and Pang in a Facebook post.
The three, aged between 18 and 22, created the app in just four days shortly after the White Flag movement began to attract attention on social media.
The lockdown in Malaysia has lowered demand for labor, with the number of registered jobs falling by 130,000 in just the first quarter of this year, according to government data from Malaysia's Statistics Department, the New York Times reported. Suicide has been on the rise during the first five months of the year, and the health ministry says part of the cause is the pandemic.
Members of the governing party have alluded to the campaign. One member of parliament from the government, Nik Abduh Nik Aziz, called on people to pray instead of waving flags.
But opposition Prime Minister Muhyiddin Yassin, Zuraida Kamaruddin, minister of housing and local government, voiced support for the campaign, writing on Twitter urging Malaysians not to be ashamed of waving the white flag.